LEG 6 PANAMA TO THE GALAPAGOS WITH TRAVEL EDGE

I opened my eyes in my bunk, thinking someone had tagged me in for my 8am watch. It was 2:23am. The sounds of ropes slapping the deck, winches cranking and orders being shouted were what woke me. In the red of the night watch lights, hammock nets full of pineapples and oranges swung wildly. I had gotten used to the constant “singing” sound of the engine but could suddenly hear better now. The crew moved about overhead, adjusting the sails for the change in wind they had expected to come right about this time.

Only a few hours ago, we had been peacefully bobbing along, motor sailing. I had gone to bed after my 8pm to midnight watch. It was Team 3’s time to shine. Alexa, Jessica, Daniella, and Anja had the action-packed shift from 12-4am. They were working with the crew to reef the main sail, which means reducing the surface size of the sail to pick up less wind. Then they put up the stay sail, right in front of the main. It sounded chaotic on deck and the ship was rocking more like an erratic amusement park ride and less like the steady cradle that rocked me to sleep. But I still felt a sense of calm. I knew and trusted 100% that the amazing sailors playing to the winds would keep us safe and stay on course, all while teaching us to sail.

The patience Anna, Maggie, and Millie have is as impressive as their sailing skills. And they teach 10 new people every time they leave a port. They’re passionate about what they do and just as passionate about being a part of eXXpedition. Anna, the Captain, was asked why she joined this project.

“Seeing firsthand a fully intact plastic chair in the ocean, in the middle of nowhere, really solidified it for me. Being able to do what I love and learn from amazing women who know way more about wildlife, policy, human health, or engineering WHILE doing something impactful… is just incredible. I had to be a part of it.” 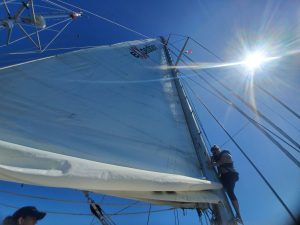 Three days ago I was on my couch watching Netflix . A few hours ago, I learned how to use the stars to successfully keep a 70’ boat on course. Today I will collect and analyse microplastics from the ocean, with no land in sight. Even though this project further proves this problem is so much bigger than what we see on our beaches, it also proves there are people out there that want to fix it. And that is what continues to give me hope. Knowing that at least if we’re doing something, no matter how small, we’re doing more than nothing.

by Crew
Filed under Panama to Galapagos, News