I’ve gotten a little flack over the past few days for having a favourite plankton. However after sharing some of the most exciting and poignant facts about the ocean’s smallest creatures, I believe I had begun to turn opinion and there’s even talk of a fledgling Plankton Appreciation Society complete with enamelled badges.
Globally plankton are vastly important. Phytoplankton (tiny seaweeds) undergo photosynthesis and produce two out of every three lungfuls of oxygen that you and I take! It doesn’t matter how many miles you live from the ocean; you are still dependent on the ocean and on plankton for one of the most basic needs of life – oxygen. A single type of phytoplankton, Prochlorococcus produces twenty percent, that’s one out of every five breaths, of oxygen in the world. Phytoplankton are able to produce these huge amounts of oxygen by occurring in huge numbers. When sunlight, temperature, and nutrients all align to produce seasonal blooms in temperate and polar waters, they are so vast as to be seen from space. Milky swirls seen in satellite photos of the UK and Europe are the result of cocoliphiphores, tiny phytoplankton that live in a box made of calcium carbonate, hence the whitish appearance. Equatorial waters are a bit of a desert when it comes to plankton life; the warm (very warm! 34°C) water and plentiful sunlight means that water ever nutrients becomes available is used up almost immediately but we’re still getting zooplankton (the little critters) like copepods and ostracods in our manta trawls. These form the basis of the marine food chain that sustains the dolphins and seabirds we so love to see hundreds of miles from land.
Right now you probably want to shout, “Yay for Plankton!!” and buy your official Plankton Appreciation Society membership. If not then my next bit of info might have you worrying a bit more about the amazing plankton. Since 1950 it`s been estimated that global plankton numbers have dropped by 40%. Changes in ocean chemistry: temperature, salinity, acidity are all hitting plankton hard. Increased acidity, known as ocean acidification, is an effect of the ocean absorbing more carbon dioxide due to increased levels in the atmosphere. A knock on effect of this is that there is less calcium carbonate available in seawater. Remember those cocoliphiphores living in their calcium carbonate boxes? Zooplankton eat plastic like so many other marine animals and may suffer similar impacts from the toxics present. The plastic also seems to impact the sinking of zooplankton poop. Usually this poop (however tiny) would help to recycle nutrients in the upper water column but when the zooplankton eat plastics this poop sinks faster and the important nutrients is lost to the deep ocean and won’t make it to the surface waters for hundreds if not thousands of years on the natural conveyor belt of ocean currents. These are just a small number of the hardships that the ocean’s smallest residents are facing but the fact is that to care about the ocean is to care about plankton.
Now I’m sure you want to know what my favourite plankton is and I encourage you to pick a favourite too. My favourite is a copepod called Calanus finmarchicus and it’s my favourite because it’s what makes the North Atlantic ecosystem go around. Copepods are zooplankton, the tiny creatures of the sea, the eaters of phytoplankton and other (usually smaller) zooplankton. Any tiny creature that is swept along on the ocean currents is plankton.
Everything from tiny larval fish to huge jellyfish are technically plankton. Calanus looks much like Plankton from Spongebob just less villainous and bright orange. It’s an important food source for iconic species such as Atlantic salmon and the North Atlantic right whale. C. finmarchicus also has a devastating relationship with water temperature. It can’t stand waters which are too warm and will shift northwards to cooler water. Its space in the ecosystem is taken by a closely related species C. helgolandicus. This is all fine and dandy but C. helgolandicus blooms at a different time than C. finmarchicus. Temperate marine ecosystems are perfectly balanced systems of resource availability across time and space.
Animals show up where and when peak food resources will be available and if that food is not available when it is needed it can lead to starvation and long term population declines. Calanus finmarchicus is my favourite plankton because it reminds us that the success of the entire ecosystem can lie with the smallest organism and is a flagship for just how fragile our ocean ecosystems are. 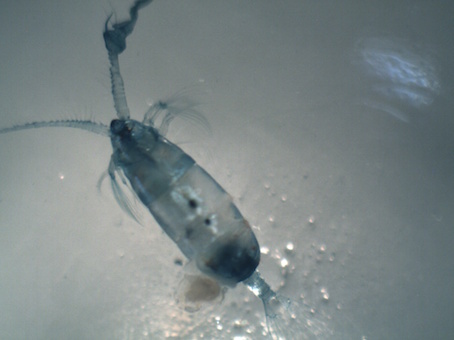