“We don’t have to build a road for the future generation, but we have to rebirth it from our ancestors.

When an island allocates its prime oceanfront land for its children and dead, even the casual tourist can tell what they value. In Rapa Nui (still known by most of the world as Easter Island), the oceanfront cemetery offers one of the best views on the island. Similarly, the playgrounds lay claim to gorgeous ocean views. In many industrial societies, developers would have built condos and resorts on these prime properties, but in Rapa Nui, the people value one another over profits. While many indigenous cultures practiced sustainable lifestyles, it’s difficult to find one that retained their ancestral wisdom, post colonisation and industrialisation. Rapa Nui provides the rare exception. 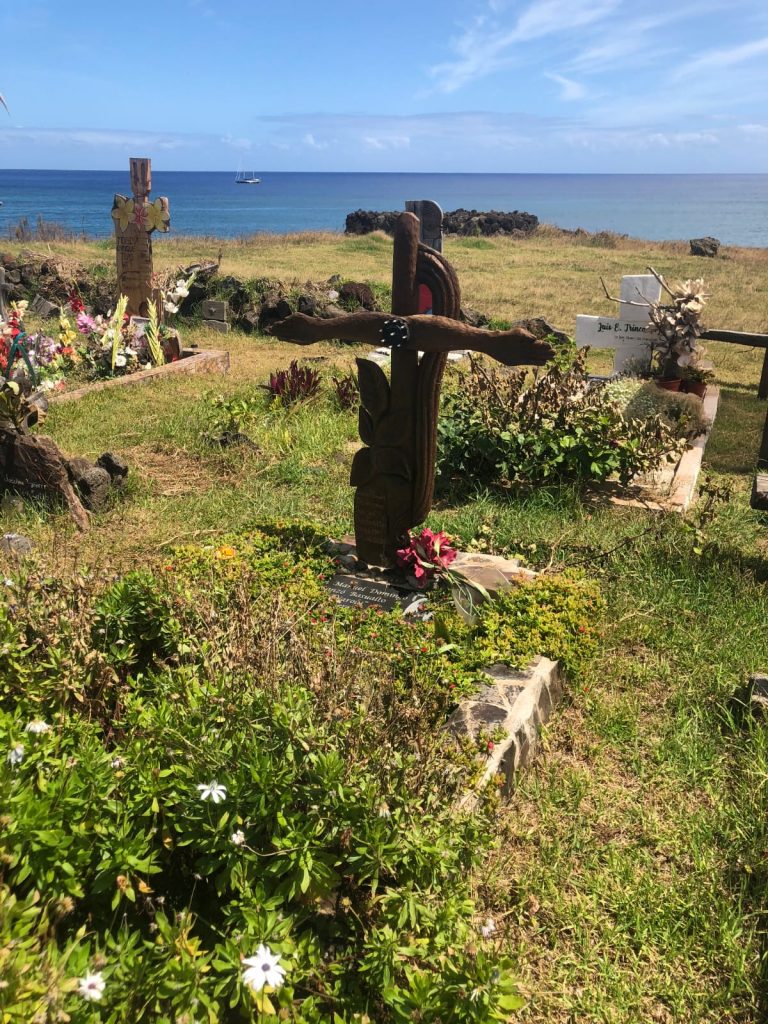 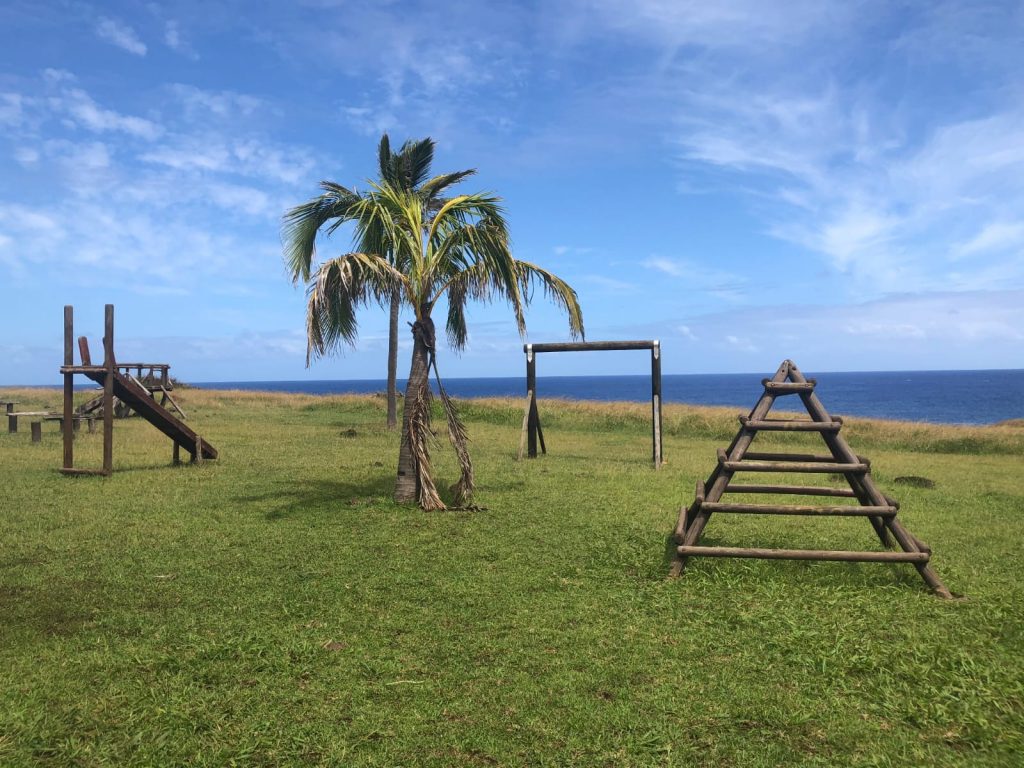 From the time the Dutch first came to the island in the 1700s, and the Chileans officially colonised Rapa Nui in 1888, the Rapa Nuians faced near annihilation. Europeans brought viruses that wiped out most of the population, then the Peruvian slave trade forcibly took people from their island. Most of the wise people who wrote down stories were killed or forced into slavery. With their disappearance, many stories vanished. When their stories vanished, the Rapa Nuians became untethered to their culture.

The Chileans arrived in the late 1800s to find the Rapa Nui society was a fragment of what it had been—its population down to only about 100 people. The Rapa Nui people entered into an agreement with the Chilean government for the island in exchange for protection and education from Chile. But Chile didn’t keep up its end when in 1904 it rented the entire island to a sheep company who corralled the people into Hanga Roa, separating the people from their gardens and fishing areas. With the lost of tribal organization, the Rapa Nuian’s faced the final separation from their sustainable practices.

Given the lost of their stories and the cultural practices, Rapa Nuians looked to western values to shape the next generations. Many decided that the best option was to send their children to high school then university in Chile. It seemed that the old Rapa Nuian ways might be lost for good.

The children born after colonisation ended in the 1960’s, whose parents had sent them to Chile to receive university educations, have now returned to Rapa Nui. They are using their voices to shape the culture, based on everything they have learned while also valuing their history. This generation is adamant that the ancestral practices provide waypoints to sustainable industrialisation.

The ancestoral ways were developed from an intimate knowledge of their island. The volcanic formation of the island created underwater tunnels and cave systems, creating an aquifer. The Rapa Nuians used the water collected there, and also created puna vai, or water containers, to have access to fresh water. Other examples of sustainable practices of Rapa Nui ancestors were categories of fishing restrictions, protecting prime areas from over-fishing.  These three categories are Rahui, the most restrictive, when no fish could be taken so that fish could grow or migrate. Mo`a, was a more temporary restriction. Tapu was a restriction for a spiritual reason. One example is that Rapa Nuians believed when a person passed away, their soul needed access to the sea so their soul could pass from the ocean to the sky.

In recent years, fishing competitions celebrate historical fishing practices that sometimes require the participant to swim and involve spears and volcanic rocks. Strict limitations on fishing are being enforced to maintain fish populations. Similarly, some modern day Rapa Nuians are not using pesticides. They are willing to compromise their yields and earn less money, because they are motivated by their love of the land, and they don’t want to contaminate it. They are looking to their ancestors, who used a lunar calendar for planting, for sustainable gardening practices. Rapa Nui offers an ideal climate for growing sweet potatoes, corn, bananas, avocadoes, mangoes, bananas, and modern day farmers grow a variety of crops to allow the soil to replenish.

One of the gardening practices was using the volcanic rock as mulch, known as rock gardens. Another is manavai, building circles of rock up to three meters tall around gardens to create humid conditions for the crops and reduce the times that they needed to be watered and being protected from the wind and sea salt. 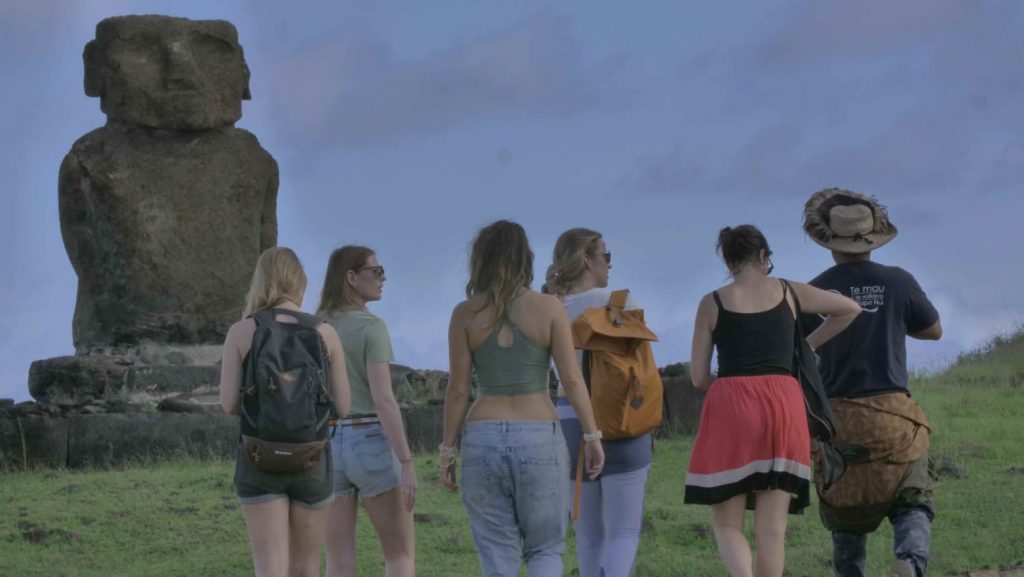 Modern day Rapa Nuians remind us that while we are creating practices and technologies to remedy some of the problems of industrialisation, we will be well to also look to the past. The Rapa Nuians are leading the way, if only we are mindful enough to watch.

Previous post 14 things we use to reduce plastic March 15, 2020
Next post When Seasickness Takes You Down March 16, 2020
Ever wondered what the ocean looks like from our m

“Anna, our awesome skipper, had an announcement

Did you know that the UK and US produce more plast

This year, we teamed up with @YoungCitizensUK and

“We sailed best to wind for the first couple of

“So far, we have analysed about 30 samples which

“I’ve found sailing to be one of the best ways

Have you heard of the ocean garbage patches? - Als

Just before the Leg 2 crew set sail from the Azore