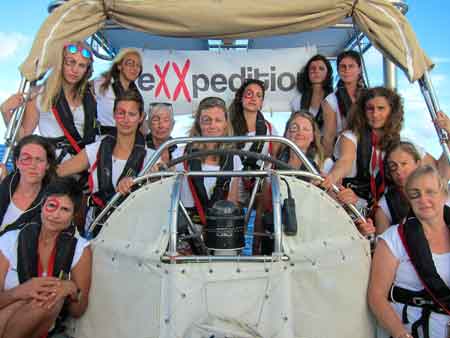 It is December! We celebrated the sunny warm day by happily singing and dancing along with “Feliz Navidad” and “All I want for Christmas is You” (we had excitedly awaited for the first day of December to play some Christmas music). It was another really hot day, and we crowded in the small area of shade when on deck (which is really conducive to great chats!) and made sure we drank plenty of water. Not long after settling in we had cheerful visitors… dolphins splashed alongside the boat, jumping and playing with us and each other. It was like they too, were celebrating this day.

Later on, during our normal science routine of trawling for microplastic (we found one piece of plastic this time), we had a bit of a surprise, a small clear bubble in our sample with blue tentacles… a Portuguese Man-o-War! It was beautiful and a bit scary at the same time. We were careful not to touch it but picked it up with tweezers and examined its intricate details. Then we put it back in the ocean.

After our trawl work, we had a mission. We are supporting a campaign called The Future. This campaign is spreading awareness on climate change and telling our politicians “we are keeping an eye on you” by watching the political process and policies being created (or lack thereof). To represent The Future campaign, we encircled one eye with black or red makeup (eco-friendly) and took photos to share. We feel our mission of exposing toxics in our environment is connected to The Future’s mission, as well. The consumption of fossil fuels, including coal, oil, and natural gas fracturing contribute both to climate change while also producing toxics in our environment. Emissions include mercury from coal and endocrine disrupting chemicals from fracking, as well as plastics and petrochemicals from oil used in personal care and cleaning products. We are also reflecting on the fact that December 2 is the 30th Anniversary of the terrible events in Bhopal, India that killed many and exposed thousands to toxics, events which are still unfolding and continuing to impact lives today. Our thoughts are also with the start of the COP20 UN Climate Change Conference which kicked off today in Lima, Peru.

Our talk last evening came from our amazing filmmaker Jen. Jen spoke from her heart to tell us her story of how she became a filmmaker as well as how she found eXXpedition. Her overall message, finding the good even in the midst of hardship and sad events, resonated with many of us and brought tears to our eyes. The story of cancer hits home for Jen and she honours family and friends both currently undergoing treatment and those passed on through this journey and many of her other amazing expeditions. We all admire Jen’s strength, resilience, and as always, her amazing sense of humour.

We can tell we are getting closer to land as some of the birds have changed and the dolphin sightings are increasing… we are cherishing our final days together on Sea Dragon and hatching some amazing plans for the future… so stay tuned!

by exxpeditiongirls
Filed under Atlantic 2014

Previous post Sunday 30 November -- Species Remembrance Ceremony & The Art of Making the Unseen Visible November 30, 2014
Next post 2nd December - Shanley's sea tales and a trip to the hair salon, but not what you think! December 2, 2014
From the development of phone apps to artificial i

Technology is changing the way we live, work and c

Happy New Year from eXXpedition!⁠ ⁠ With the n

… and just like that it’s the end of another y

Children’s books are a powerful tool for promoti

How can we use research to create change? ~ As pa

Each eXXpedition voyage is designed to encourage c

~ As part of our Science Spotlight series we are d

Have you considered buying recycled gifts for your

People worldwide are using their creativity to bri