ON LEG TWO FROM AZORES TO ANTIGUA WITH COPERNICUS MARINE SERVICE

Aboard eXXpedition, the cuisine is all veggie-based. Once we were out at sea, our Skipper Anna carried out an anonymous poll to see if we are all comfortable with fishing during our trip. It was an unanimous yes, so the next morning the two fishing lines went out.

It’s a bleak reminder of the overfishing issue we’ve got on our hands. The Atlantic has been the ocean which has been fished for the longest, and it’s been done unsustainably. This is the result. One week into our cross-Atlantic ocean and we didn’t manage to get anything.

But Day 8 dawned, and our luck took a turn for the better. The team was outside, post-lunch and pre-science session, chit-chatting about nothing in particular, when I thought to look out at our fishing lines. And then I saw it, a green blur just beneath the waves, throwing a lot of spray into the air. Overreaction ensued. “FISH! FISH!” “ANNA!!!!!!!” “QUICK, REEL IT IN” “ANNNNNNAAAAAA!”

Anna was there in no time, and successfully retrieved the fish from the water. It was a Mahi-Mahi. We cheered all around the boat. You’d have thought we were on our last can of beans.

Also known as a Dorado or Dolphin fish, the Mahi-Mahi has got a big bulging head and is a pop of bright lime, green and yellow.
It is spectacular to look at. As soon as it was out, Anna killed the fish. The fish turned silver within seconds. It was a sobering sight.As dramatic as it sounds, we took the life of this fish for our own gain, and it does make you thankful.

While Anna took charge of filleting the Mahi, Winnie took over Project Investigation. When handed the organs of the fish by Anna,
she delicately took us through a dissection. The fish was a young female, and Winnie showed us the egg sack, liver, intestines, heart. When going through the intestines, we found two whole squid legs in the fish, but no plastic.

One fish wasn’t going to go far with 14 of us so we wanted to catch another one. More importantly, Mahi-Mahi mate for life so it would have been cruel to leave its companion behind. Make of that logic what you will. We ended up catching another fish, not the mate, but another young female. We think they were both too young to have mated yet. 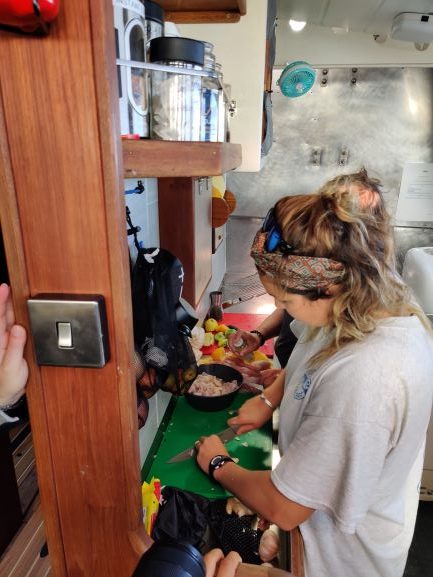 In the evening, Anna and First Mate Maggie prepared a real feast for us, a Mahi-Mahi trifecta. We had some of the fish fried in butter and garlic, a portion of ceviche and sashimi with soy sauce, ginger and honey. My vote goes for the sashimi.