WRITTEN BY THE CREW

ON LEG TWO FROM AZORES TO ANTIGUA WITH COPERNICUS MARINE SERVICE

Dawn at 6:00 AM for Team 2 (Emily, Nita, Marita, Rikki), under power with a shrill propeller squealing in the backdrop, and utter stillness on the Atlantic Oceans surface. For as far as the eyes can stretch in the inky light of dawn is calm. Just a few knots of breeze feather the backs of our necks as the engine powers us through the glassy lens of the sea.

The crew are quiet, content and calm having been on watch for a few hours, bellies full of tea, honey and milk and biscuits shared on deck. We relish the sunrise together, physically connected, yet each of us lost in our own private thoughts gazing towards the brightening eastern sky. We smile knowingly to one another, remaining quiet letting each enjoy the solitude of their own thoughts. As the sun edges above the horizon, a few bridled or sooty terns- too dark and far away to tell the difference, flit out just meters from the glassy lens of the water. Emily is finally genuinely smiling, after 36 hours of grinning and bearing the relentless discomfort of sea sickness. The journey commenced in 3-5 meter seas, and breezy conditions, so severe nausea washed over a few crew. The rising sun brings a glow and warmth to our bodies which are strewn out in the cockpit. A few dark round puffy clouds hug the border between ocean and sky.

It is in this calm revelry that the sound of water breaking in an unfamiliar rhythm grasps the attention of Marita, Sophie and Nita. We patter and scramble across the decks of the cockpit, in a mad dance of clipping and unclipping to make our way forward. The noise of our enthusiasm reaches some of the next watch crew, and heads peak above decks to see what all the commotion is about. A small pod of Atlantic spotted dolphin (Stenella frontalis) have heard our squealing vessel and headed for the bow to skip and frolic. 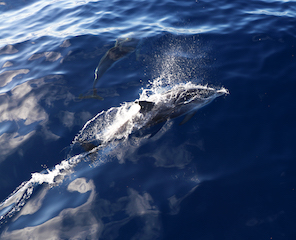 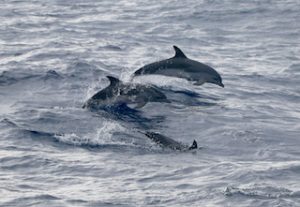 Scrambling like crabs towards the bow, the girls all shriek in delight as the dolphins communicate to one another, calling into other members of the pod. Grey, spotted, rather small and slight in form the dolphins look sleak and nimble playing across the bow. Two or three are confident and remain just meters forward of the bow, whereas a few other shy ones race in and then quickly disappear off to starboard, only to reappear moments later. 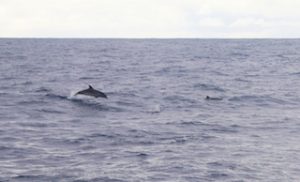 A small young individual hugs close to the pack that drops into the deep, and darts upwards to get a push from the wake of the bow. Then she retreats off into the blue.

The Atlantic is deep here, roughly 3500 meters, steeped in a confident hue of cobalt- clear with few particles or debris. A pair of what seem to be Stenella coeruleoalba or Striped Dolphins join the pod of 3-6 Atlantic spotted dolphins still riding the bow wake. They appear more sleak and the distinction between colours more fierce and bold. They behave precisely the same, not a movement discernible as they rise and fall just a meter below the surface effortlessly. Every few minutes, one breaks the surface for a breath of fresh air, with a swoosh as the carbon dioxide escapes. You can tell they must be exerting themselves, as we are moving at 5-6 knots, but not a movement of their bodies can be detected. They hold court for us entertaining us all with “oohs and ahhs” and each of us trying to interpret their behaviors based on our limited understanding of their world. After about 30 minutes, the last one pealed off to starboard, and we watched them slow down their movements, and lull on the surface. They may spend the day – on such a calm water day- sleeping on the surface, circling together to shield themselves from predators. 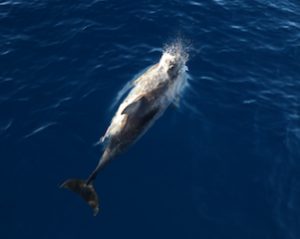 Team 2, after being on deck for over 5 hours, having cooked breakfast, swabbed the decks and scrubbed down below, motored into the moonset, and was witness to the sunrise, were ready for slumber in our cozy forward berths. What a way to start Day 3 on board!

Potential Crime Scene, Squidcidence at Sea: Blood on the Bow a Murder Mystery in the North Atlantic 11/3/2019

It was a dark, yet starry night, sailing by a reefed yankee and the mizzen sail on the midnight to 4:00 AM shift. The wind picked up from 9 knots to a steady 14-16 knots and Sophie rallied the crew to unreef the yankee to full sail. The yankee wouldn’t unfurl all the way so Sophie- clipped in of course, walked on starboard towards the bow. Sophie returned to the cockpit with a quizzical look on her face. “There is a weird oily sheen on the bow.“ Worried that something was awry with the engine, we shut off the power to look for evidence of a faulty motor. Nothing. Rikki escorted Sophie up to the front in darkness, while the remaining crew (Nita, Marita, and Emily) huddled in anticipation for clues of what had occurred.

The crime scene left conflicting hints in the dim light. Puddles of dark ooze, disconnected from one another covered the deck in an area about 3 by 3 meters. A splatter of dark discharge darkened the bright yankee sail, but stopped just a meter up the sail. Rikki had seen a small fluttering bird- likely a storm petrel about ½ an hour before towards the front of the mast, but no feathers or signs of avian life presented. Could a fish have jumped up the several meters onto deck? Was some murderous intruder on board? We had just earlier seen an AIS signal on Maritas helm, which blinked in and out and then disappeared off the radar screen. The hairs on the backs of our necks and our unshaven legs bristled in fear. A game of clue ensued? Where was the weapon? Who was the victim? A squid – most definitely a large one- was the likeliest culprit, but how did such a beast hurl itself up on deck? And the most pressing question- where was it was it now?

Previous post The three questions of everyday life on the boat November 3, 2019
Next post Do fish use forks to eat their dinner? November 5, 2019
Follow our Journey#exxpedition