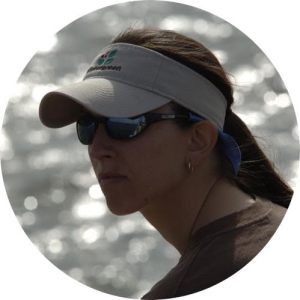 If you’d asked Sara what she wanted to be at aged 12, it would have been a dolphin trainer or a sea turtle biologist, sea salt literally flowed through her veins from an early age. But, as she got older, she realised that our oceans are in trouble and there is much to be done to strike a balance between the economy and the protection of our beautiful blue, and all that coexist there.

I guess she’d also have never added Cancer Thriver to her resume either, I guess non of us ever would, but at just 37 Sara was diagnosed with stage 2 hormone-receptor-positive breast cancer. Without ever knowing the true cause of any cancer, Sara is a firm believer in the evidence that suggests that exogenous, man-made chemicals that mimic oestrogen can alter the functions of the endocrine system and cause various health defects, including cancer

This gives Sara more reason that ever to make the unseen, seen, and she is passionate about continuing her eXXpedition dialogue once her Caribbean Leg 2 voyage is complete.

“When I saw the expedition goals — making the unseen seen, from toxics in the ocean to toxics in our bodies, and raising the visibility and voices of women in science along the way, I knew I had to be a part of this endeavour“

After trying her hand at Washington DC policy making, Sara quickly hung up her suit and traded her high heels back in for flip-flops, when she joined the North Carolina Sea Grant in August 2003 as a fisheries extension specialist in their Manteo Office.

Her focus now is on cultivating cooperative research with the commercial and recreational fishing industries. Sara believes that working together, fishermen and scientists can improve our understanding of the complex interactions between fishery resources and fishing practices.

Most recently Sara has been working hard to try to turn the tide on derelict fishing gear and other marine. In 2014, with support from NOAA’s Marine Debris Program and North Carolina Sea Grant, the North Carolina Coastal Federation began an annual sounds and shorelines clean-up. The effort is a public-private partnership between fishermen, N.C. Marine Patrol officers and the general public, and something Sara is incredibly proud of supporting.

Dragging Sara away from the sea wasn’t easy but we managed to sit down with her before she leaves for the Caribbean at the beginning of March, to answer our ‘meet the crew’ hot seat questions…. here’s what she had to say

Q: What colour is your toothbrush?

Q: If you could teleport where would you go and why?

A: The moon. I cannot even imagine the stunning images of our home planet – the mountain ranges and the oceans! It would be surreal to experience Neil Armstrong’s “One Giant Leap for Mankind.” And really, who does not want to space travel? 😉 OK, I will admit seeing prehistoric animals and dinosaurs would be pretty cool, too!

Q: Who do you admire the most (dead or alive)?

A: Tie between my grandfathers

Q: What’s your top tip for reducing plastic use – what works for you?

A: Though debated heavily, I am a proponent of reusable shopping bags as good for the environment and the economy. I stash them in my car and office, so they are readily available at all times. That is the only way they consistently get used.

I’ve read varying statistics, but about 8-10 percent of our total oil supply goes to making plastic, with an estimated 12 million barrels of oil a year used in making the plastic bags used in the U.S. alone. If someone were to throw away 10 bags a week the entire year through, it would represent a fuel equivalent of 60 miles of driving.

If we probe further into the environmental impacts, the fact that plastic bags do not biodegrade but photodegrade means they break down into smaller and smaller toxic bits, contaminating soil and waterways, and entering the food web wherein animals accidentally ingest them. According to data from the Ocean Conservancy’s annual International Coastal Clean-ups, plastic bags are consistently in the Top 10 pieces of trash collected on beaches around the world.

Bag bans with financial punitive measures may not be the way to go in fostering behavior change as much as patterning conservation efforts after some U.S. state ‘bottle bills.’ Container deposit legislation (CDL) requires a refundable deposit on certain types of recyclable beverage containers in order to ensure an increased recycling rate. BottleBill.org reports that beverage container legislation has reduced total roadside litter by between 30-64 percent in the states with bottle bills.

Here on the northern Outer Banks of North Carolina (U.S.), we are the only place in the state with a bag ban. In 2009, the state senator in office at the time promoted the bag ban bill primarily as a way to keep the barrier islands’ beaches and waterways cleaner. There is no ‘tax’ at the register. Instead, you get ‘rewarded’ for the ‘good behaviour,’ receiving an average discount of $0.05 per bag off your bill. Generally, area sentiment is positive about this law; so much so, a repeal of the law has yet to get enough traction.

Q: If you could put just one thing at the top of your bucket list, what would it be?

Q: What’s the most delightful word you can think of?

A: Loneliness in the Twilight Years

Q: Who would be your 4 ultimate dinner party guests (dead or alive)?

Q: Where would you go if you were invisible?

A: African safari tour — then I can get up-close-and-personal to the animals without fear of being mauled!

Q: If you owned your own Yacht, what would you call her?

Q: What have you done that you are most proud of?

Q: What would your Superhero power be?

A: power to fly

Q: What piece of advice have you been given that was most rewarding?

A: I have a friend who always says, “Count your blessings! Things always can get better and always could be worse.” It’s a great statement, implying one should hold onto hope for the future without being too overcome by the present

Q: What’s the most important thing you want to take away from your eXXpedition voyage?

A: How cultural values influence global ecologic practices, both from the locals I meet at our island anchorages and from my other crew members. I think my hope for my role is to further the eXXpedition initiative aim to stimulate new dialogue and interaction among humanities and natural science scholars and practitioners

Q: What’s your favourite marine animal and why?

A: Leafy Sea Dragon – I just think they are so uniquely beautiful and graceful. It looks for all the world like some aquatic plant drifting aimlessly in the current. And, I heard the name is derived from its resemblance to the mythical sea monster from Irish legends

Q: What’s the one thing that drives you crazy?

A: People who do not show to an appointment / event without the courtesy of a phone call.

Thanks Sara, what an incredible story of bravery and strong female spirit! I look forward to learning more when you take to the seas with the eXXpeditiongirls for Caribbean Leg 2 on 5th March!

by exxpeditiongirls
Filed under Caribbean 2016

Previous post From I to We as we sail the Caribbean Sea February 24, 2016
Next post Day 5 - Outreach in Barbados February 25, 2016
Exciting news! ⛵️🌊 Together with @plymuni

Did you catch our co-founder @missemilypenn’s ta

A huge thank you to Lush Basingstoke, who are doin

And that concludes the final leg of our Virtual Vo

Excited to see that our friends at Gecko energy ha

Did you catch our co-founder Emily Penn's talk for

Wishing our Round the World Mission Leader Sally @

As our 8th Virtual Voyage drew to a close, our Arc