Last summer, during eXXpedition North Pacific, our crew attached a tracker to a ball of marine debris in the North Pacific Gyre. The tracker deployed by the eXXpedition team on 4th July 2018, was the first deployment of 40 trackers, built by Pacific Gyre and owned by the Ocean Voyages Institute.

This is part of a multi-institutional project, funded by NASA and including the University of Hawaii, Scripps Institution of Oceanography, Applied Physics Laboratory of the University of Washington, Smithsonian Institution and Canada Department of Fisheries and Oceans. It was designed to collect information on the movement of large debris in the ocean and, also, track the debris so  a larger boat could remove it. 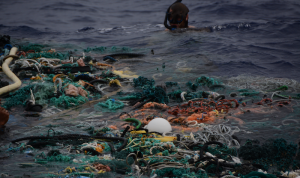 A member of the Kwai crew determining the size and shape of the marine debris ball for pick up. Credit: Ocean Voyages Institute/Greg Yoder/Sasha Delaage

Recently, we received an exciting update from the Pacific – the marine debris ball has been retrieved by an Ocean Voyages Institute vessel Kwai. Completely co-incidentally, this is a boat that eXXpedition Mission Director Emily Penn was familiar with as she had been on-board for another ocean mission in 2013, where she traded western supplies for coconuts and seaweed in Kirabati.

Here is a video of the Kwai team removing the debris ball from the Pacific:
Credit: Ocean Voyages Institute/Greg Yoder/Sasha Delaage
Nikolai Maximenko from the International Pacific Research Centre in Hawaii said:

“I am sure you are pleased that, after 336 days adrift, the net that you tagged was retrieved by Mary. I think your net was one of the largest and contributed well to the 40 tons that you know about from the news.”

You can read the news article here.
We are really delighted to be able to support a science programme of this nature, which helps researchers to understand more about the movement of debris in our ocean and, thus, help inform solutions to ocean plastic pollution.
This was part of the eXXpedition North Pacific science programme, which also looked at air, sediment, water and microplastic samples.

by Soraya Abdel-Hadi
Filed under North Pacific: One, News, Science

From teacher to documentary photographer to commun

Meet the Virtual Voyage Leg 3 crew! For our day-l

This Saturday, we’re kicking off our third Virtu

Watch 5 took this leg of our virtual voyage to the

Happy Anniversary to Round the World Leg 7! - This

From sailor to architect to engineer, each of the

Can you guess what the most commonly found item on