After five days in Marina Lanzarote, taking part and leading workshops/talks for the Atlantic Odyssey, Sea Dragon and her team of 14 changemakers has finally set sail! 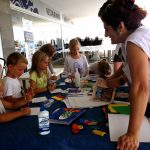 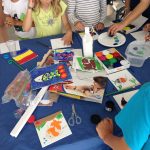 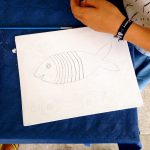 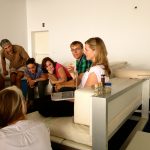 After crossing the line with 34 Atlantic Odyssey boats

we set a course between Lanzarote and Fuerteventura heading out into the BIG WIDE ATLANTIC OCEAN!

At first the winds were light, however later it picked up and we were doing 10 knots beating into the wind. This promptly helped half the crew feed the fishes! The first day has involved lots of training and getting the crew accustomed to the boat and sailing – half of which has never sailed before let alone crossed an ocean! 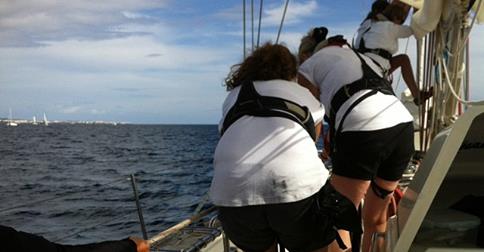 We swing between excited and a bit of anxiety about what lies ahead… We are still new to each other and tentative about how to approach one another.  Like the weather, one minute we are so sunny and animated and the next a dark sky as either seasickness or tiredness takes hold, but it quickly passes. The crew that CAN eat, have been eating extremely well thanks to our on-board Chef/Scientist, Lucy. Last night’s meal was a delicious ‘Sailors See At Night’ stew, choc full of tasty vegetables with tons of beta-carotene and served with thyme dumplings! Lucy is particularly delighted to have the luxury of cooking with a gimbled stove in the galley.

We are divided into three watches, led by Emily, Shanley & Anne. We are adjusting to the rhythm of the watch schedule that organizes the work that needs to be done aboard among smaller groups for 4 or 2 hour periods.  During these hours we haul the lines, steer the vessel, cook and clean but share our stories with our watch mates. Each watch has a scientist and a media guru. As yet we have not been trawling for plastic as we are still in Spanish waters, however we have spotted floating marine debris which we have been entering into the Marine Debris Tracker  app – designed by our very own crewmember – Jenna Jambeck!

We would like to say a big hello to the crew of the Corwith Cramer, a sailing research vessel who set sail with a crew of students from Gran Canaria at the same time as us. We are planning to use the same plastic sampling protocols when we trawl the oceans and will be sharing our data with each other. On the morning of our second day, we’ve already weathered our first storm, but have also spotted dolphins and rainbows, and had shooting stars to entertain us at night – so, swings and roundabouts! Our heading is now due west as we pass the last of the Canary Islands. We expect the wind to shift tomorrow and start heading further south.

by exxpeditiongirls
Filed under Atlantic 2014

Previous post Where Our Waste Goes November 15, 2014
Next post Anchors Away and They're Off! November 17, 2014
@parley.tv has launched their latest ocean school