Joining the second Leg of eXXpediton North Pacific, from Vancouver to Seattle, Meg’s first real boat trip was the ferry over to Vancouver Island. By the end of the voyage, she was taking the helm, steering the ship and riding the confidence to land a life-changing job back home. She tells us what those eight days at sea meant to her, and how she’s embraced her storytelling superpower.

What led you to apply for eXXpedition?

I was working for my local council in the UK in waste and recycling; running campaigns and communicating with the citizens of Derby about good bin behaviour and our impact on the planet. Practically; I wanted to gain the experience to be more authoritative at work – to be able to say, ‘I’ve been there. This is what I’ve seen, and this is what I think we need to do.’ Emotionally; I wanted to create a better world for my niece and nephew.

I saw the Round Britain trip on Sky News, and Emily Penn saying to the camera – ‘we’re looking for volunteers and we’d love to hear from storytellers, scientists, sailors and anyone who wants to help us continue this work’. When I heard the stats about how few STEM jobs are held by women, and the impact that plastic pollution can have on a biological female body – it really shocked me. And I loved that eXXpedition seeks to get women represented in roles they typically aren’t.

I applied, but never in a million years thought I’d get an interview! At the time I was pretty much as far from the sea as you can get in the UK. I’d never swum in the sea in my life and felt far removed from the idea of the ocean. It was a thing that surrounded other countries. I didn’t feel that connection at all.

I’d never swum in the sea in my life and felt far removed from the idea of the ocean. It was a thing that surrounded other countries.

So what was it like, those first few days at sea?

When I went to Vancouver, I stayed with people on Vancouver Island. The ferry I took to the island was about as much boat experience as I’d ever had! So then getting on a 72 foot sailing vessel for the first time felt like stepping into the Lion’s den. I had absolutely no idea what I was going to do.

That first day was terrifying. It was daunting emotionally, as well as physically. It was the furthest from home I’d been without regular contact with my family – and that struck me as one of the scariest things about the voyage. The first night I cried and cried, and the second day I was sick everywhere! I didn’t think I could do it. And I was listening to all these women and feeling in awe of them. I felt like I had nothing to offer. But I needn’t have worried. I made friends for life on that boat.

What was it like sharing the experience with these other women?

You build this indescribable bond, sharing a tiny space over eight days. By the end of the trip, I’d done a complete 180. I realised I wasn’t there to know everything, I was there to listen and learn and contribute. The transformation in me over those eight days is unlike anything I’ve ever experienced. I feel like a changed person, because it pushed me to the absolute limit of myself, surrounded by these women, who were there to support me and inspire me to do the right thing  –which is to carry on in this work. 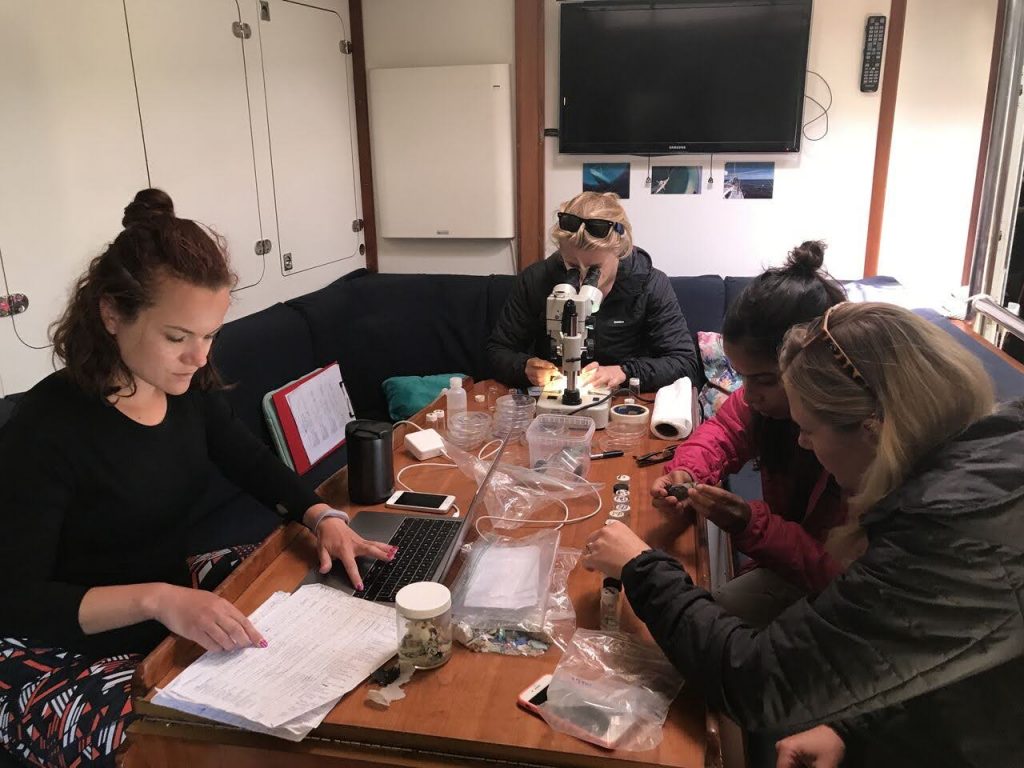 I feel so privileged to have been surrounded by such remarkable women in all their different fields. And not just remarkable, but hilarious, kind and thoughtful too. The type of people who – when it’s 2AM and you’re doing a night watch and the boat is tipping and it’s raining and it’s dark and it’s windy and you feel sick – can still make you laugh! If people can make you smile when you’re clinging to a winch ‘thinking this is how I die’, it proves that they’re a special bunch.

I’ve realised that that’s my challenge. That’s where I come in – I’m the one that’s got to inspire people.

I went from the high of the voyage to back at my local council, where not everyone was quite as passionate as me. It felt like the biggest bump back down to earth. I couldn’t reconcile my life-changing experience with everything being exactly as I’d left it back at home.

But, it’s been about 15 months since then, and I’ve realised that that’s my challenge. That’s where I come in – I’m the one that’s got to inspire people. I did so many talks, and assemblies at schools. I’d show them pictures of what I’d seen and they’d start out really disinterested, but by the end they’d all be going out to buy reusable bottles. That felt good.

I now work for a national sustainability charity – working with food waste. I’ve become much more aware of sustainability overall. We had great chats on the boat about what’s beyond plastic, and my eyes have been opened to the issue in its entirety. But every time I think about the voyage, it reignites the desire to make a change and do better. Every little thing feels like a victory. Whether it’s my brother saying to me – I bought a sustainable cotton t-shirt today, or people at work saying we’ve made a breakthrough with the government. I’ve learnt to be excited by every development, to see the opportunity and possibility in anything.

What was the most shocking thing you saw with your own eyes?

We were doing a beach clean on an uninhabited island off the coast of Vancouver Island. We arrived on one of the beaches and trekked across to the windward beach, facing the Pacific. When we looked beneath the surface there, we found over 200 pieces of polysterene, 26 plastic bottles and a flip flop. I cannot get that flip flop out of my head. It was perfectly intact and perfectly wearable. If we hadn’t gone there and taken it away it would’ve stayed there forever. That day on that beach shocked me to my core. It changes the impact I can have. I can show people the picture I took and say – ‘I was there. I touched this. I found this flip flop.’ I’m not a scientist and I’m not a good sailor but I can tell a good story.

I can show people the picture I took and say – ‘I was there. I touched this. I found this flip flop.’ I’m not a scientist and I’m not a good sailor but I can tell a good story. 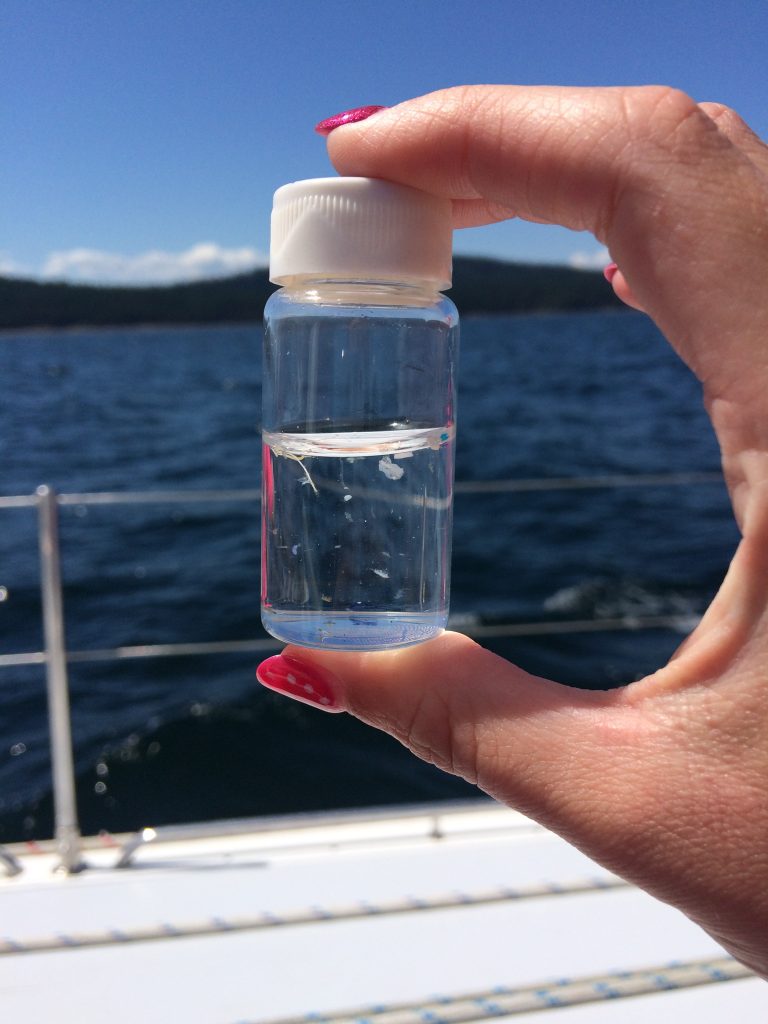 What are you proud of?

I’m most proud of the impact on my family and friends. Since eXXpedition, I’ve changed so inherently, that at Christmas my Mum and Dad now buy second hand presents, and wrap them in newspaper and string. My friends are talking and asking about plastic more. I like to think that the fact that I went halfway across the world, got on a boat for the first time in my life and pushed myself to the absolute limit has made them think: ‘what can I do?’

I know I’m a bore, but I don’t really care, because it makes me so happy! I end up having conversations I never expected to have. And if I can get one person to change their mind about something then I’ve won.

What are you up to now?

I now work for WRAP (wrap.org.uk), running consumer campaigns – like ‘Love Food Hate Waste.’ I’ve wanted to work there for years. I’d see jobs advertised and think I wasn’t good enough. After Exxpedition I looked again, and for the first time thought, ‘I’m capable of this, I should trust myself’. And I got it! I absolutely love what I do. I have Exxpedition to thank for that, because it made me feel like I can, and that’s worth its weight in gold.

Any advice for the newest crew members?

I wished I’d embraced everything sooner, without fear. I was so conscious at the start of what I didn’t think I could contribute, that I didn’t look outward enough, and see what the others were doing in a positive light. All I could think was – I’ll never be as good as that. I wish I’d opened my ears and eyes earlier. Once I had, I couldn’t believe how inspiring these women were. I wish I’d spent less time worrying about how I measured up.

by eXXpedition Team
Filed under News

"From afar, the San Blas islands looked like a sce

What is your superpower? From teacher to earth sc

Our virtual voyage crew picked up 971 pieces of li

We're thrilled to announce that @EyeBuyDirect, the

Over the past few days, our virtual voyage crew ha

Meeting on Zoom for the first time with Mission Le

We’re kicking off our forth Virtual Voyage tomor

We’re thrilled to be part of @1percentftp, which

This time last year, our Round The World crew had