From industrial ecology student to beach cleaner to sustainability consultant; Kristine’s seen the plastic problem from all angles, connecting dots every step of the way. Now a circular economy advisor for TOMRA, she’s working on closing the loop. She tells us how 2018’s North Pacific leg changed everything… 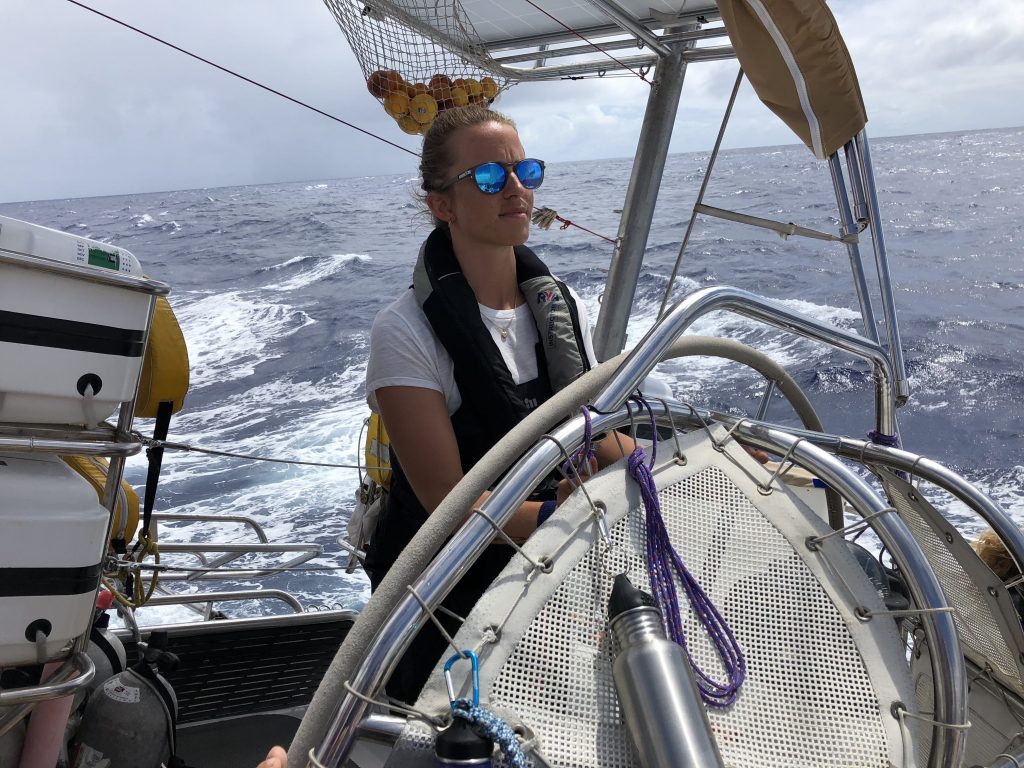 How did you end up on a voyage with eXXpedition?

In 2018, I’d just joined TOMRA [www.tomra.com], in Oslo. I remember meeting my friend Malin for a beer. She’d gone on the very first leg, back in 2014, and told me they were sailing again, so I applied. I ended up having to go to my boss after only a couple of months and say “er… I need some time off!” They asked what I was going to do, and said, “that’s awesome, let’s be a part of it, let’s make it a bigger thing.” They ended up sponsoring me to go, and becoming title sponsor for the entire eXXpedition North Pacific voyage!

What’s the work you do with TOMRA?

At the base of everything we do there’s sensor technology. I was hired in the deposit return part of the company, but the same knowhow also runs massive industrial scale sorting machines. In 2018, the company was shifting from being mainly business-to-business to becoming more relevant to consumers. They wanted to engage with the community building around their recycling work, and that’s why it made sense for them to support my voyage. They didn’t have anyone doing that before, pioneering their technology in that way. That’s what I’ve been doing for TOMRA over the past year – and the story of my voyage has ended up being a big part of my job. 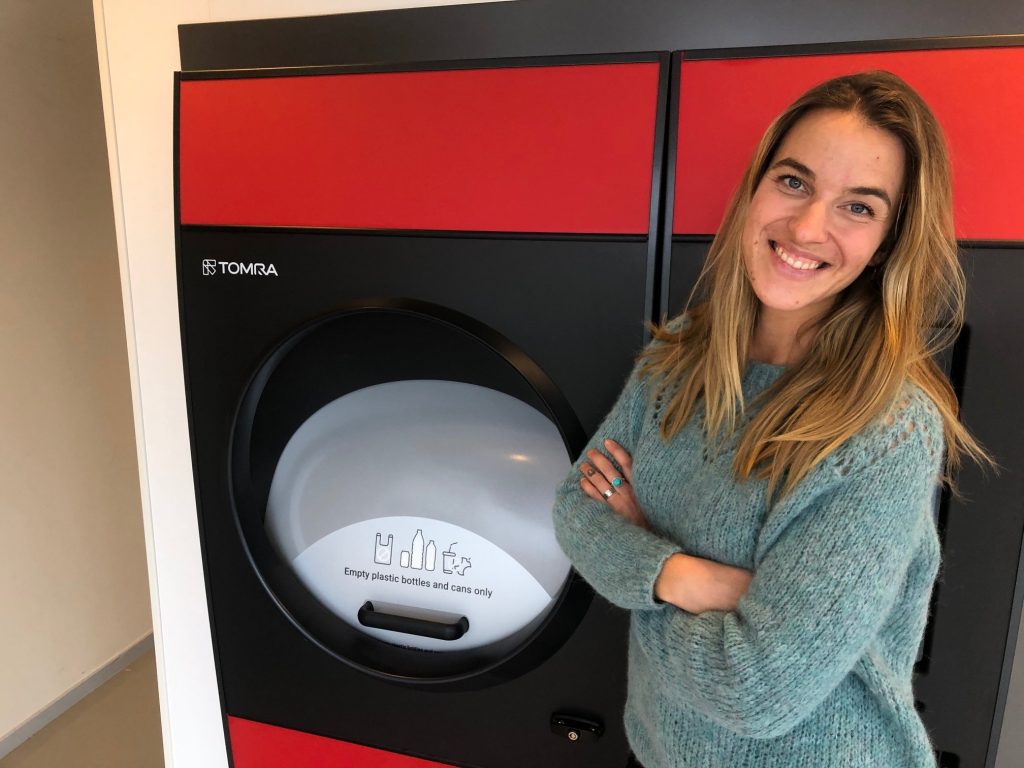 How do deposit return schemes work?

So the function of deposit return legislation is to add a small deposit to the price of the drink, or rather the bottle or can, which you get back when you return the empty container for recycling. It is really the concept that you buy the drink, but only borrow the container. TOMRA makes machines that take back these empty containers, called ‘reverse vending machines’, or RVMs. What’s important about these machines and this type of recycling as well is that it keeps food-grade contact plastic material separate from contamination from other material streams, like household waste. This is important because if a plastic bottle is mixed in with other types of plastic or waste, recyclers are not allowed to use it for food contact anymore.

So by putting it into the system that an RVM is part of, bottles can be turned into new bottles over and over again, and that directly avoids the creation of new virgin plastic. It’s also a perfect example of circular economy, because you teach people about their waste by shifting their perception, because it’s not waste anymore – it’s a resource, and valued accordingly. We want people to know when they’re doing something good, and work with systems that support this.

Tell us about your first impressions aboard the boat…

I grew up in Norway. My grandad taught me the very simple joys of being on the ocean, and fishing – but I’d never sailed. I was surprisingly unprepared for life at that angle and what it meant. I had to concentrate so hard just to pee! Our first mate Anna has this really distinctive laugh. I remember feeling the waves on the first night and thinking “how am I ever going to get used to this, and survive for three weeks?” but hearing her laughing on deck I thought – as long as Anna’s laughing, that’s my indicator – if she’s having a good time, we’re safe. But if she goes quiet – that’s when we should be worried! 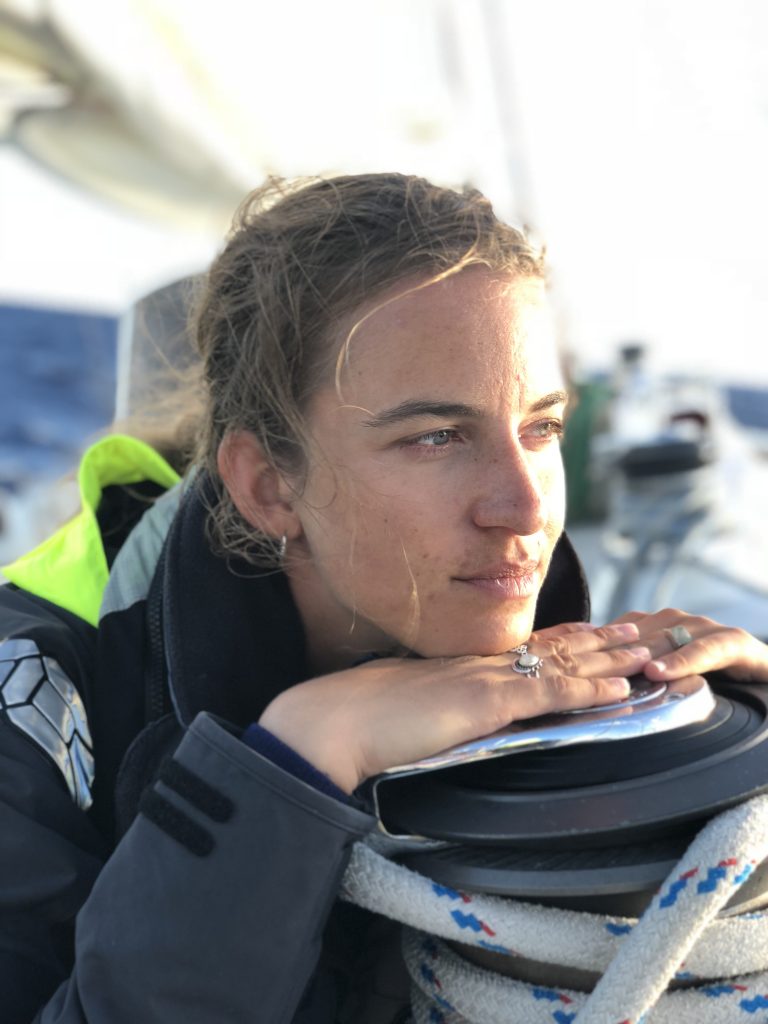 “You can feel in your body the distance and days you’ve covered. Knowing the plastic is everywhere around you and it’s going to get worse as you go on. It’s like going to Mars.”

When you arrived at the gyre, was it what you expected?

I thought I had it on lockdown, that I knew what I was going to see. But it’s like looking at a picture of Everest – it’s completely different in real life. We didn’t see another boat for 11 days. So then seeing lawn chairs and washing baskets float by is utterly bizarre – you’re by yourself for so long, yet human leftovers increase in magnitude as you go. It’s easy to show a picture of the microplastics we found. But that feeling of having sailed for so many days, cooked so many meals, been in and out of your bunk so many times, seen so many stars… you can feel in your body the distance and days you’ve covered, and it makes you realise the samples are just a snapshot. Knowing the plastic is everywhere around you and going to get worse as you go on – it’s like going to Mars.

How did that experience affect you?

I had some really rough moments out there. Seeing an albatross fly around the boat one day, knowing it feeds on plastic debris out there, was just a kind of heartbreak I’d never felt before. But you come back to land and think – I’ve seen it, and no one does that on purpose. It’s a symptom of a system that we created, for ourselves. So we can re-create it, come up with new ideas. When I came back, everyone was so supportive and excited, they wanted to see what we saw and hear what we learnt. Perfection’s never going to work, so we need to do imperfectly. We need to get 7 billion people just starting that journey, to get where we need to go. It’s a standard I hold myself to. If I’m not going to do it, how can I ask anyone else to? It’s empowering to start there. 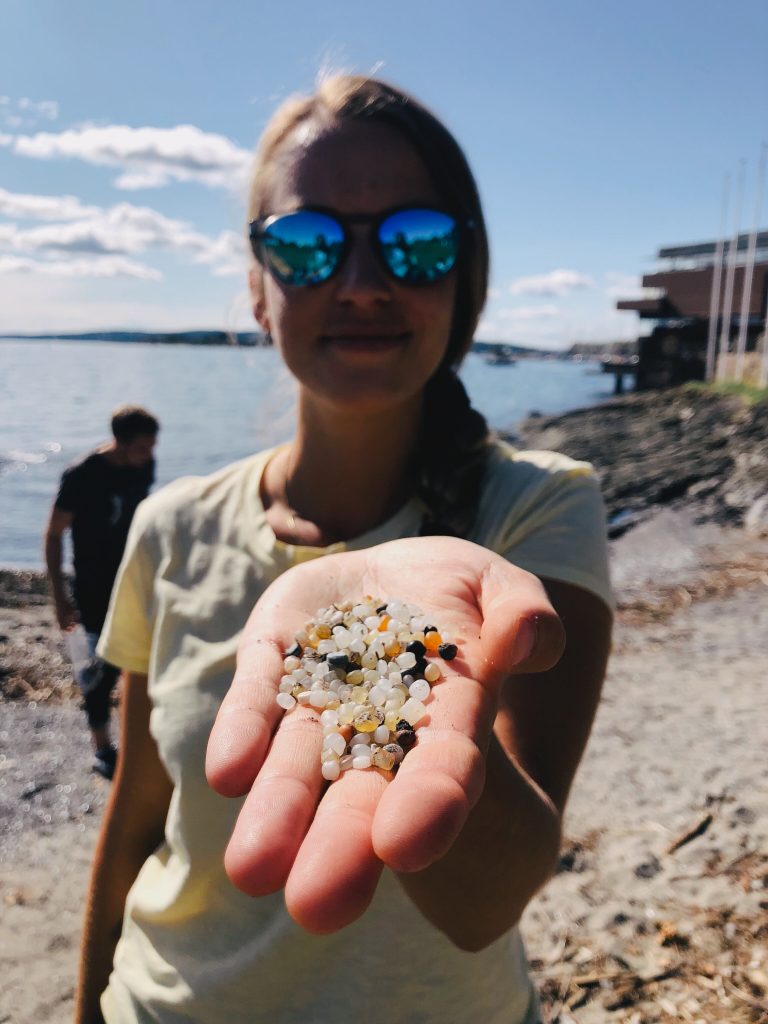 Did it change the way you work?

It’s easier to talk about the urgency of the problem, having seen it, and that’s the feedback I got professionally as well. Anyone can show you a video, but having been there, on that boat – you can’t tell me it isn’t relevant. It gives a legitimacy to what you try to accomplish that I’d never felt professionally – a legitimacy as a person, a woman, and as someone who’s interested in ocean health, coming from the recycling industry.

“Those three weeks still influence what I do every day.”

Looking back over the last year, at the talks and strategy work I’ve been involved with and the whole new communications direction for TOMRA, I’ve found those three weeks still influence what I do every day. 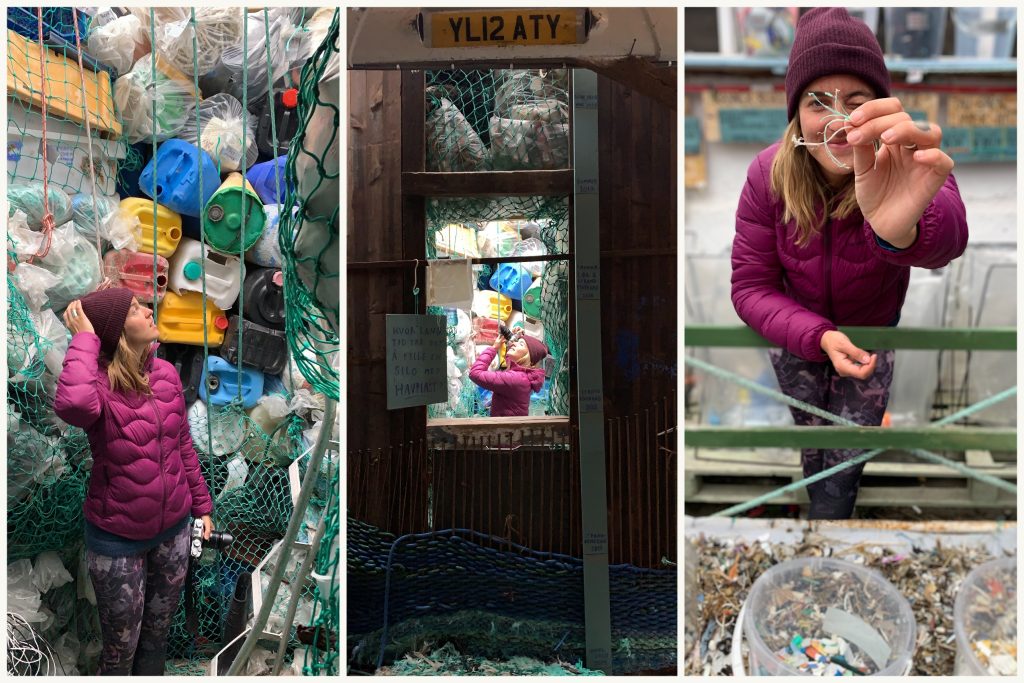 Are you noticing a change in the industry?

We’ve been working with partners that we wouldn’t normally, on some exciting innovation projects, looking at shipping industry logistics and ocean plastic. Companies are listening now. Having been out there myself, I’m having to explain that it’s more complex than pumping in and recycling plastic straight from the ocean, where you’d bring in 50/50 microplastics and biological matter. And they’re asking – ‘OK, then what else can we do?’ A shift seems to have happened in the industry. It’s less about greenwashing and it’s become important that things work. We have to commit to getting into the nitty gritty. It’s not an option to paint things in pretty colours any more. There has to be fundamental change.

Where’s that fundamental change going to come from?

I learned so much from the women that I went to sea with. Having a whole ecosystem of women together, with perspectives from policy to filmmaking, made me less afraid to start turning cogs – a little bit here and a little bit there, to see where things go. You have to start taking action somewhere, and it’s going to be different for every single industry. You can’t be too afraid of the effects, you just have to watch them unfold – to learn enough to know what you need to do, to get where you want to go. I’m seeing the system so much more now. I always have the system in mind. 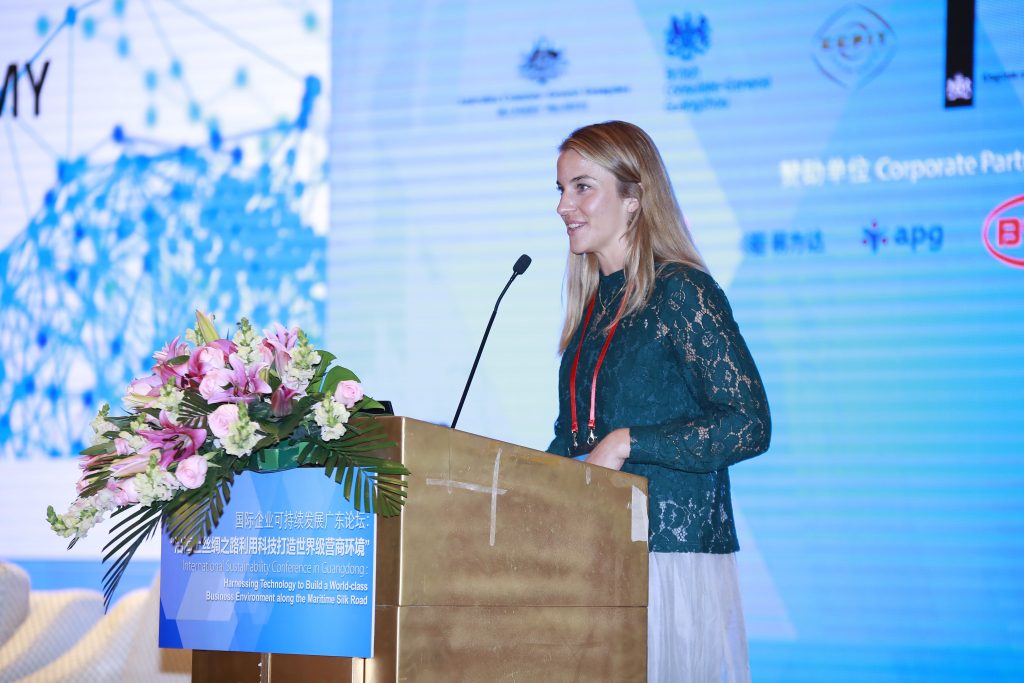 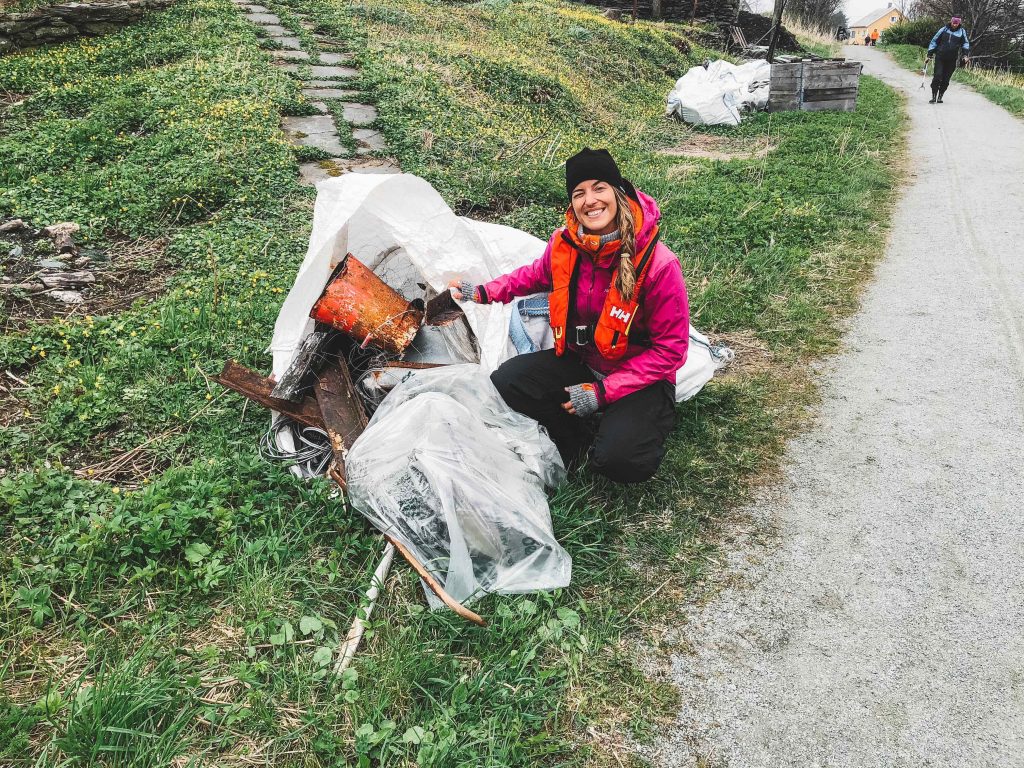 Did the voyage help you discover your superpower?

I discovered I like solving things that seem impossible! I’m not afraid to go into where it’s tricky; where there’s products, processes, relationships and legislation. In my work I’ve been part of setting the standard for what the upcycling of ocean plastic should look like – using the technology we already have to try and do better, but there are a lot of roadblocks. For example, plastic waste is defined as toxic waste, which has implications when it comes to import and export, and what can be recycled.

If we end up figuring out that we can’t use 99% of ocean plastics then, in a way, that’s awesome, because people will realise it’s not the solution we think it is. That’s the really big picture, and where the deposit return schemes come back in. Having seen the microplastics with eXXpedition, and knowing it’s impossible to clean them up. It’s helping me communicate the importance of better systems: systems that prevent plastic reaching the ocean in the first place.

What advice would you give ambassadors just about to set sail?

Keep a journal! Your days are going to blur together, and you’re not going to know what you did on what day. You’re going to want to remember, to be able to tell your story when you come home.

KRISTINE IS CURRENTLY BACK ON BOARD FOR LEG 8 OF OUT ROUND THE WORLD VOYAGE. FOLLOW HER WORK AND ADVENTURES HERE.

by Crew
Filed under North Pacific: One, News, Ambassador Stories

Huge thanks to @outsidetv for sharing the story of

This week we kicked off Virtual Voyage Leg 6: Braz

How can you create an impact? In the final sessio

There are just 7 days left to support the In-Mind

Last weekend, Leg 5 of our virtual voyage crew too

Mission leader @planetearthrowl was all set for an