An early start is always easier in the heat. I’m not entirely sure why and admittedly the first night sleeping on the boat was better than I had imagined. The temperature is palpable and I am very aware that we are still at 14 degrees north which means it will be significantly more oppressive in the weeks to come as we approach the equator.
After going through the boat with the full time crew and starting to learn of her idiosyncrasies I then took up the task of dismantling the proposed expedition menu and restructuring it into a list of provisions taking into account the existing inventory of supplies on board. For a moment just imagine the task of ensuring a balanced and nutritious diet for 14 women for 4 weeks in the tropics, 2 of which are vegan, 3 vegetarians, 1 wheat intolerant, 1 gluten intolerant and 1 lactose intolerant. In addition to this we are on anchor in Western Africa making the logistics of getting 90 meals for 14 on board somewhat entertaining. Still, there’s nothing I like more than a challenge. 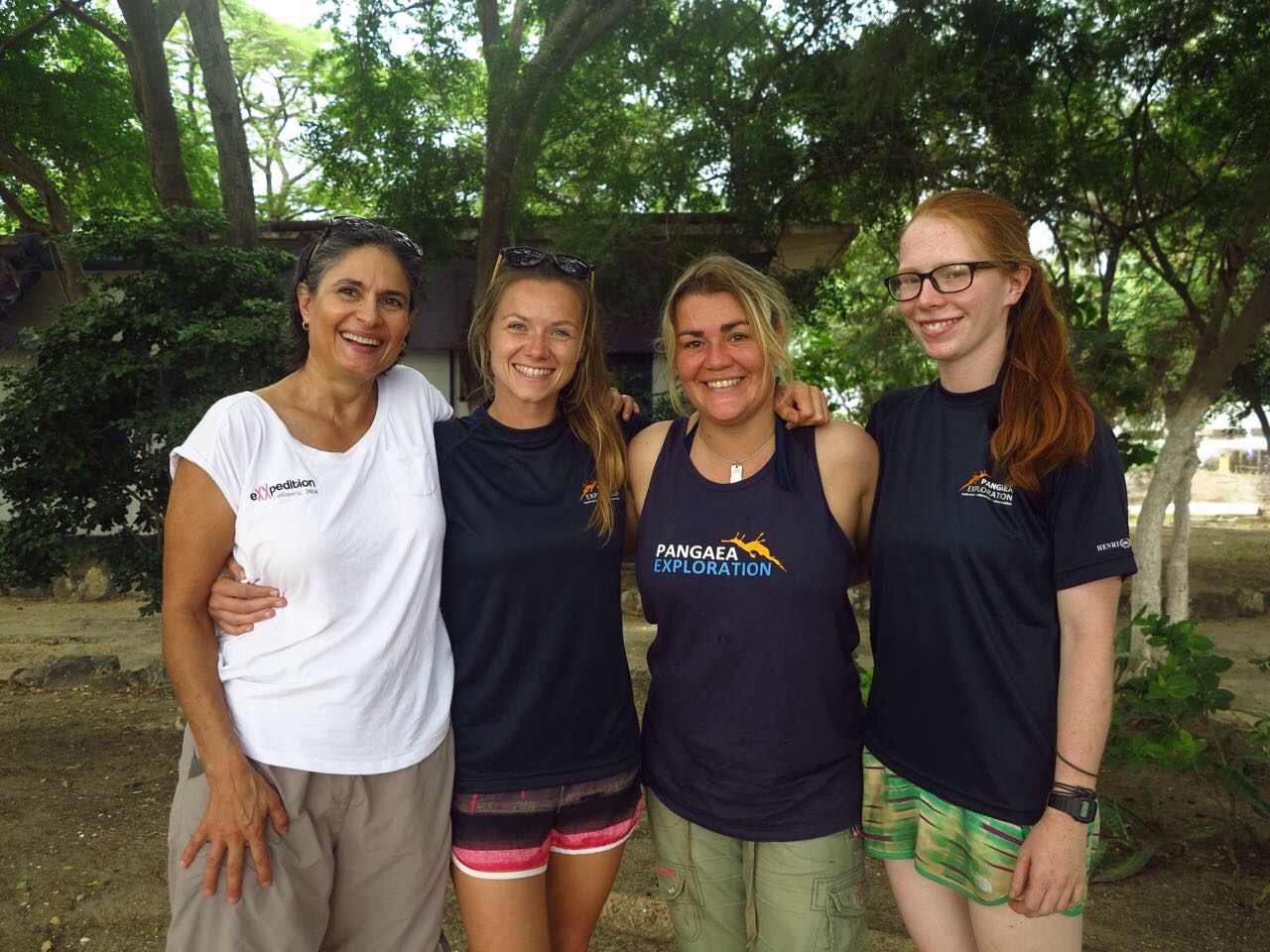 Days 1 and 2 of the epic challenge were largely based around the supermarket ‘Casino’ in the centre of Dakar. Due to the vast logistical task we were always going to need a taxi to assist us and outside of the Cercle de Voile where the boat lays on anchor there is always an array of battered yellow and black taxis with their drivers waiting together in the baking sunshine for the chance of any passing trade that may come their way. It isn’t hard to find anyone to help with anything in Senegal. The tricky part is communicating exactly what is required and trying to work within some kind of reasonable time frame to effect it.
I had planned to take some photographs on the drive back through Dakar but the rear left window of the cab was jammed closed and less than transparent making it somewhat tricky. Holly was sitting beside me and her window was jammed half way up making a far better prospect. Fortunately neither of us were restricted by any form of functional seatbelt making it far easier to attempt to take pictures of the close quarters duelling between equally ominous vehicles at speed. 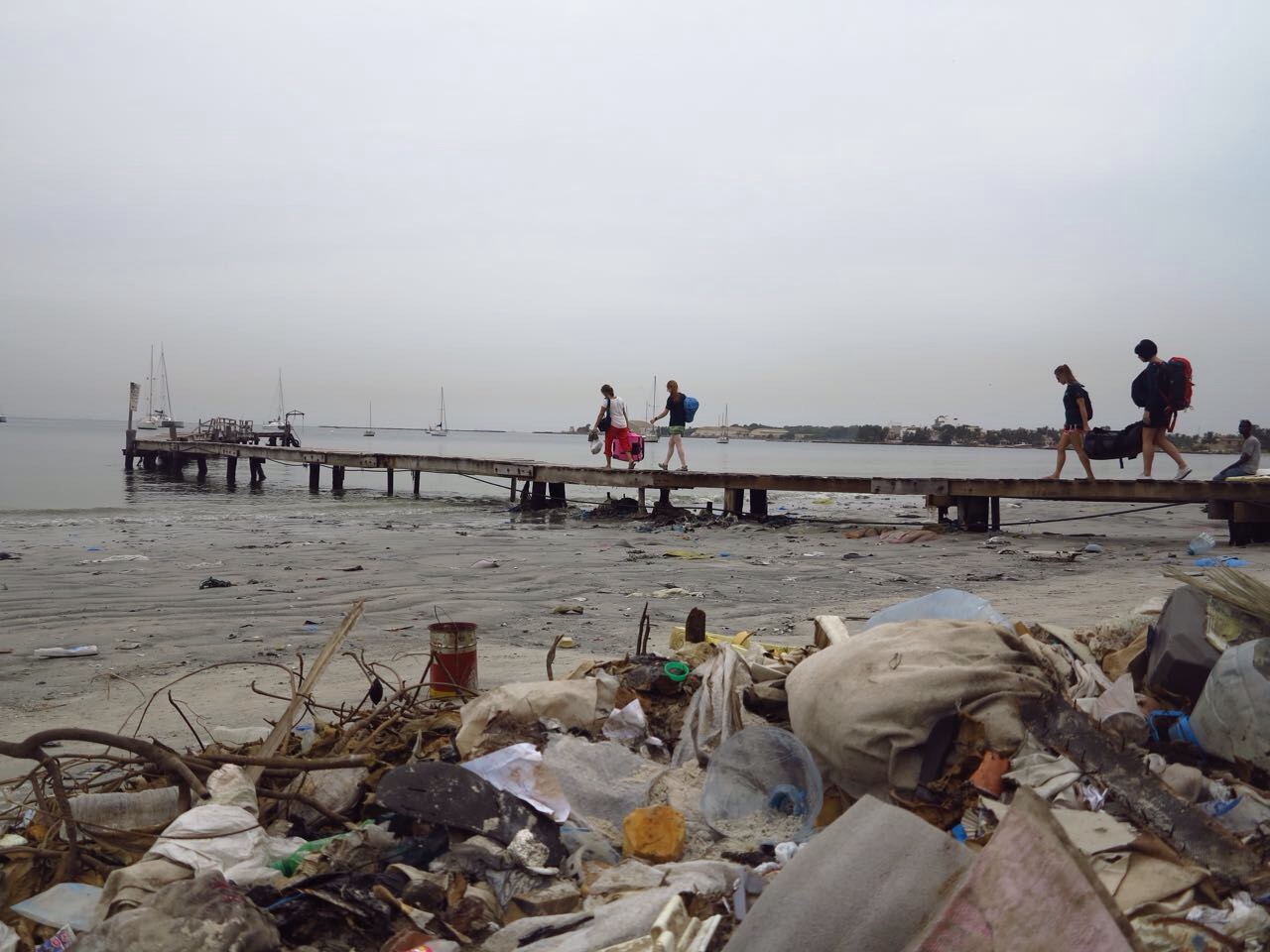 On an interesting note and whilst hanging on for dear life, we did manage to capture some of the graffiti on the roundabouts campaigning for “Senegal Propre – Nous demandons des poubelles dans les rues” and “Senegal Propre du respect pour l’environnement”. This was a little insight into an awareness that certainly exists in Dakar regarding the state of waste on the streets and the need to respect the environment. The very obvious issue of course is how can these colourful and vibrant people concern themselves with these issues when poverty and the fundamentals of basic human survival are far higher on the list of priorities.
Naturally a visit to the supermarket should be quite straightforward for 2 very obvious western female tourists and this probably would have been more the case had a TV camera crew not chosen to film an advert in that particular store on that particular day. Neither Holly or I can quite remember how our three loaded trolleys ended up poised at the checkout with a camera, light and TV presenter waiting for us to discover them and inadvertently star in whatever it was that they were filming – we never quite did discover what. The positive side of course were the 5 Senegalese shop assistants that completed our packing and delivered our goods back to the patient taxi driver that jumped up and down excitedly outside as he saw us re-emerge. It was all rather surreal really and there was a great deal of laughter that ensued as a result of our first little mini adventure.
Day 2 was a little less bizarre but it was becoming increasingly obvious that finding products such as Tofu and Quinoa was never going to be easy in Dakar. Indeed our quest at one stage found us in the midst of an intense indoor African market with chickens hung in the sweltering heat swarming with flies and stall after stall of imploring voices and piercing eyes all focused on the two of us seemingly oblivious to the overwhelming stench of waste that was becoming increasingly hard to bear. Needless to say we left without tofu.
With all of the non- perishables aboard, it was time to complete the victualling with the fresh produce which meant us travelling once again into the centre of Dakar to the Marche Castor – an outdoor African street market selling fresh food produce, some of which was fresher than others. At first I have to admit it was a little intimidating as we wandered along the crowded streets inspecting the produce including fish straight from the ocean left in the open heat and covered in flies. We soon found our groove as Holly inspected the various products for freshness and sustainability whilst I negotiated in broken French with the various venders. I really started to enjoy the experience and relaxed into the atmosphere as we drifted from seller to seller. Although much of what we purchased was very cheap and fresh, there was a limit once again to what we could achieve and our day took us to 3 separate stores as well as the open market. It was completely exhausting and as we took our third and final full RIB back to the boat, we both knew that we could not have done any more to deliver the produce that we had hoped for. 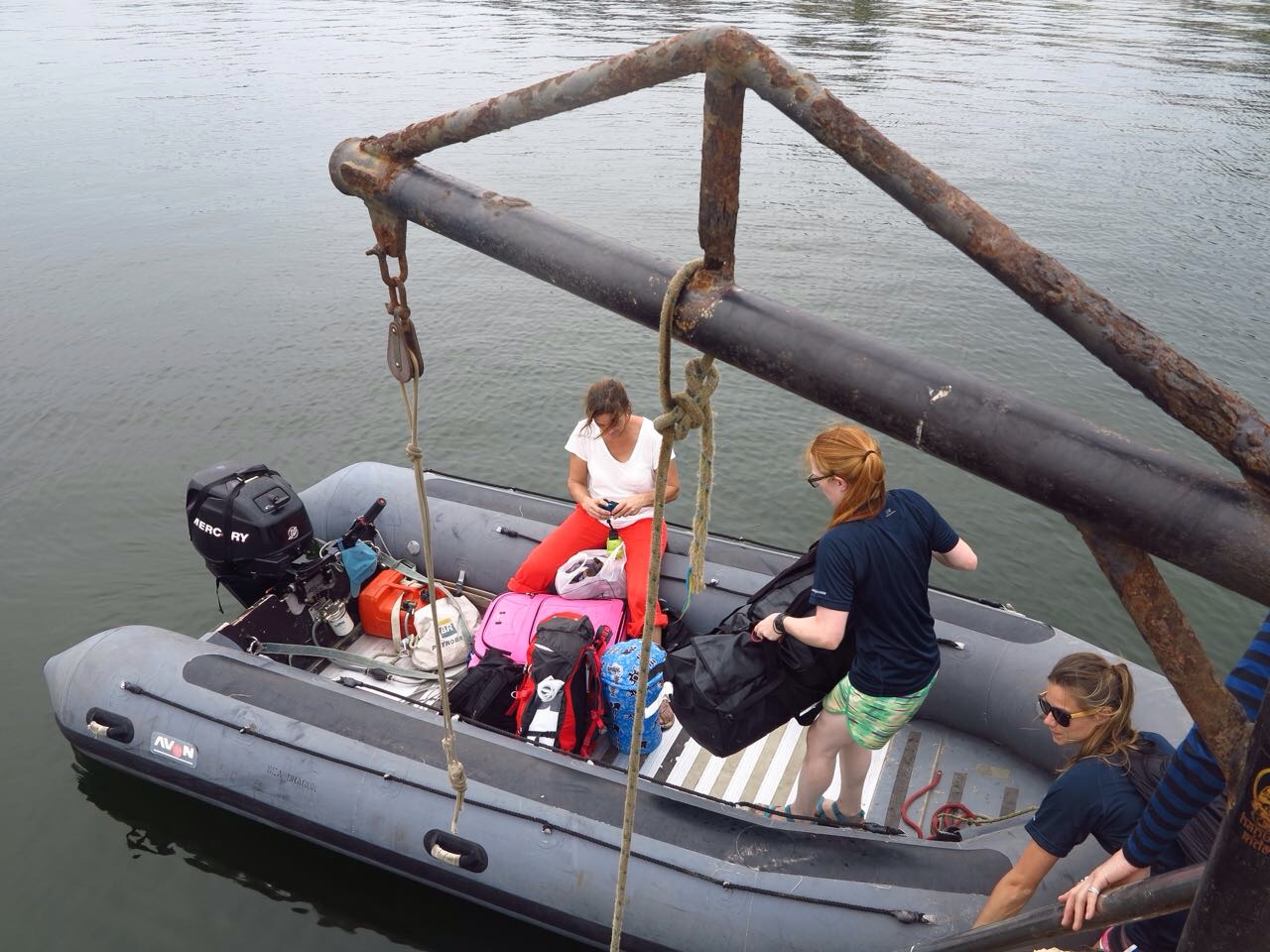 Another sun dropped over Dakar this evening and the local fishermen once again returned their catches to the beach. Sea Dragon is almost ready for her voyage across the Atlantic and waits patiently in the bay for the crew that will arrive tomorrow. It feels as though we have completed a huge adventure already and Africa and I have become friends. I think that despite the pollution and evident waste I will miss her colour and her honesty.
Emily Caruso, 1st Mate eXXpedition Ascension 2015.