The sea. It is a sea upon which wars have been fought, across which goods and slaves have been traded, across which we have journeyed for centuries to exploit ‘new’ lands, decimate indigenous populations with our diseases and return with their treasures, and across which we are sailing today to investigate ocean plastic pollution. 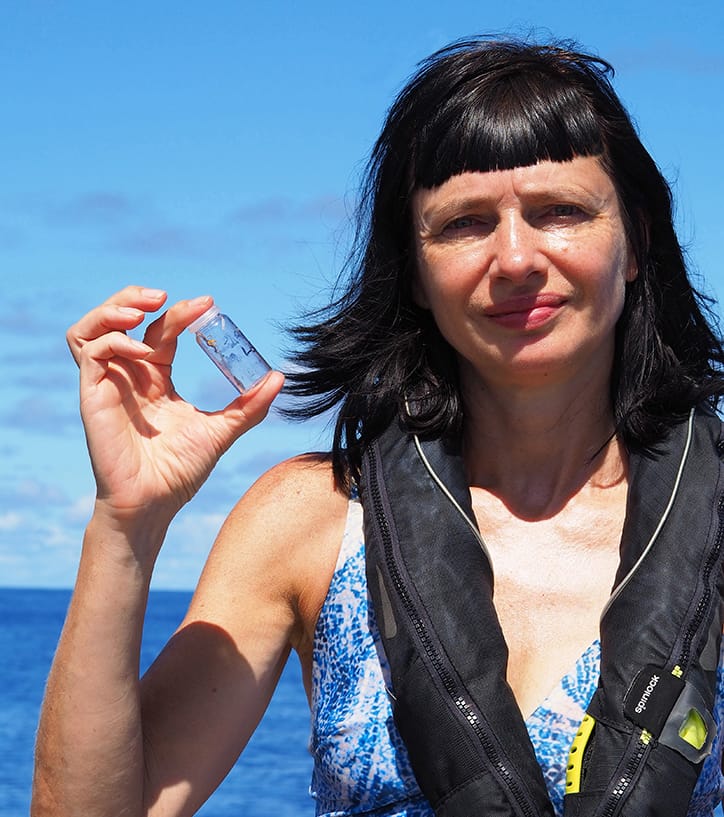 The sea. Writers and poets speak of the silver sea, the lonely sea, the audacious sea, the sublime sea…. The plastic sea doesn’t have quite the same ring to it, yet that is one of the predominant qualities of the sea in this area of the South Pacific, and the reason why we are making this voyage south from Galápagos to Rapa Nui, Easter Island. We will be sailing into the South Pacific Gyre where the world’s predilection for plastic is at its most visible.

As we sail with two thousand miles of blue before us, we will experience many faces of this mercurial sea.

On our first day at sea, an hour out of harbour, we passed the meeting of currents which had split as they passed around San Cristóbal and were rejoining on the other side of the island, tracing an almost glass-like, curvilinear track between deeply furrowed verges.

CURRENT, in navigation, courans, (currens, Lat.) a certain progressive movement of the water of the sea, by which all bodies floating therein are compelled to alter their course, or velocity, or both, and submit to the laws imposed on them by the current. An Universal Dictionary of the Marine 1769.   And therein lies our challenge on this voyage. How to bring velocity to a cultural current to move behaviour and habits faster around plastic pollution?

On the first night, the sea sloshed companionably against the hull and its undulating voice lulled us into the gentlest of womb-like sleeps until we are woken four hours later for our next watch. The midnight watch is my favourite. I walked up the companionway steps into a dark starscape.  (No-one on board knows why a ship’s corridor is called a companionway as, on SV TravelEdge at least, it is barely wide enough for two people to pass). The moon sat like a luminous saffron saucer on the table of the horizon.

On the second night, the sea whispered conspiratorially and lured us with the glittering phosphorescence of a billion plankton. A shoal of flying fish were visible as white flashes of leaping light to starboard and the brightest of shooting stars illuminated the night sky.

On the third day we tangoed across the waves and eddies, our white ruffled line tracing a course across the deep blue dancefloor. Sea sickness set in amongst many of the crew as the sea roiled and seethed with a short swell and science was postponed in the hopes of a return to a kinder ocean tomorrow.

WAVE, a volume of water elevated by the action of the wind upon its surface, into a state of fluctuation.  Definition from An Universal Dictionary of the Marine, 1769.  We start asking ourselves, what are the actions we can take as a multidisciplinary crew to build momentum, to agitate, to sweep away resistance and create an unstoppable wave of change?

On the fourth day the swell lengthened, so we twice dropped the Manta Trawl off the spinnaker pole for half an hour each time. The contents of the trawl were passed through three sieves of increasingly fine mesh.  Several Men o’ War but no visible plastic.

On the fifth day we made our first drop of the Niskin Bottle. I watched it plunge down into the unfathomable depths of the ocean, astonished by the clarity of the water as the rope extended to its full 25 metres .  We whispered ‘Find the Niskin’ as we deployed the messenger weight, known on board as the golden snitch, which triggers the Niskin to close. These samples will be sent back to the lab at the university of Plymouth to analyse how the types and quantities of microplastics in the subsurface compare to the surface water and will be the first global dataset of its kind.

On the sixth day Maggie, our first mate, hoisted metal buckets up the Mizzen mast. These will be left there for 311 nautical miles to determine whether microplastics are being transported by winds.

As the voyage continues, the wind drove us on towards our destination, with scurrying clouds and a seething sea painted a hundred hues of blue, green, grey and white.  We pitch and roll. Sleep is difficult as the sheets and rigging rattle overhead and we slide into the leecloth or hull, depending on whether our bunk is port or starboard. We pass the 1000 mile mark – halfway through our voyage. Our night watch is spent creating a humorous poem about our voyage and crew based on the Beaufort Scale, which rates wind force from 0 to 12, although we have only experienced up to Force 6 to date.

Ten days into our voyage. Every mile brings us nearer to the gyre and every trawl brings up an increasing amount of plastic: translucent filaments which coil inside our sample bottles; flecks of blue, green, white, some we are able to analyse on the Perkin Elmer FTIR, but many are too small , requiring analysis back at the university of Plymouth; a black mesh, still pending analysis. 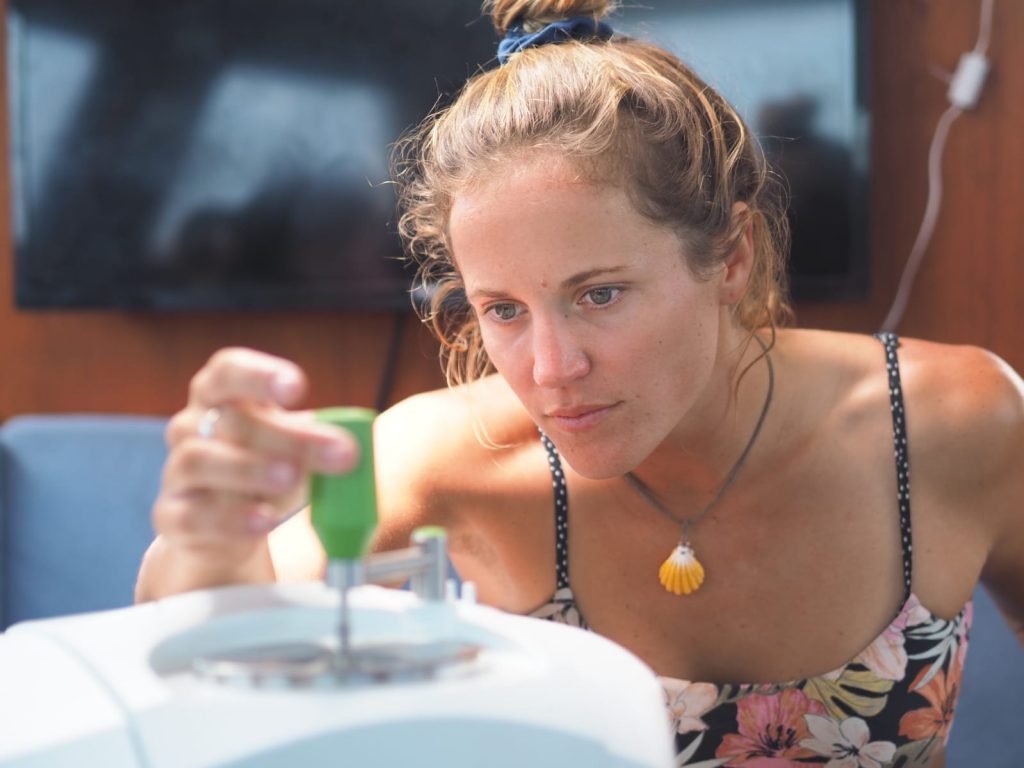 Thirteen days into our voyage the sea gods smile on us and the sea is almost eerily calm as we enter the South Pacifiic Gyre.  We have sailed over 1700 miles and are in one of the remotest areas of the Pacific Ocean, nearing the most remote inhabited island in the world. We spend the morning and afternoon dropping the manta trawl and Niskin and analysing the results. We are shocked at what we find: our trawls within the Gyre bring up five times more microplastic, microfibres, and film than the total of all the other trawls we have carried out outside the Gyre on this voyage.

Almost every watch continues bring its moments of awe at the sublime beauty surrounding us: the evening a school of pygmy killer whales played in our bow waves; the pinks, purples and oranges the sun paints the clouds as it sets a little later every evening on our journey south; and this morning when we saw a bright flash of rainbow suspended in a cloud at sunrise.  The rainbow is a symbol of hope the world over which transcends the scientific explanation behind this regularly occuring phenomenon formed by the meeting of sunshine and water.  And herein, perhaps, lies the pathway towards finding an answer for our challenge.  We need to engage people around the world in the fight to preserve the beauty and biodiversity of our oceans.  We need to use the groundbreaking science we are collecting on board as a tool, but also engage people in an emotional response to the problems of plastic pollution.

A little over 200 years ago, the great explorer and scientist Alexander Von Humbolt travelled through Latin America. The Humboldt Current is named after him, an upwelling current bringing nutrients up from the deep but also bringing with it some of the tide of plastic which makes its way into the South Pacific Gyre.  Humboldt’s scientific method encompassed art history, poetry and politics but in the intervening years scientists have pursued ever-narrowing areas of expertise.

The crew on board this eXXpedition voyage has been selected for our multidisciplinary set of skills and we need to work together to rediscover a multidisciplinary approach.  In a world where we tend to draw a demarcation line between science and the arts, the subjective and objective, we need to reconnect science with our emotions, because we only protect what we love.  I would like to think that this morning’s rainbow is nature’s way of telling us that there is hope for our oceans if we can find ways to make people around the world fall back in love with the science and poetry of this boundless deep blue sea.

by Crew
Filed under Galapagos to Easter Island, Round the World 2019-2021