For Rowan growing up on the Isle of Man, every horizon held the ocean. From peering through the lens of a microscope to standing at the helm of a ship – she knows and loves the sea. An ambassador on our North Pacific voyage, since returning to dry land she’s been gathering evidence for the people in power and seeking the solutions that start with society. We caught up to talk islands, innovation, and taking on the world at 45 degrees. 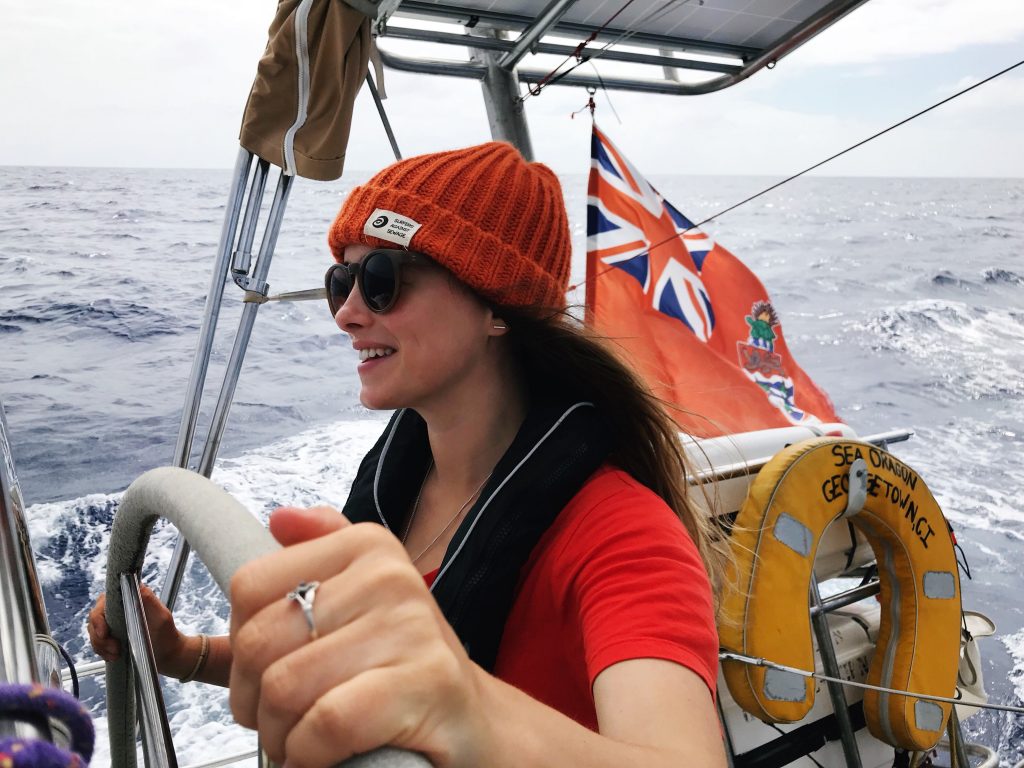 When and how did it all begin?

My dad used to be a commercial diver and my mum grew up on boats. As children on the Isle of Man we spent so much time in the sea, and I ended up studying a degree in Ocean science From that very first lecture, I knew – ‘yes, this is me.’

When I came across eXXpedition I thought, ‘that’s exactly what I want to do.’ I wanted an adventure, to really go out into the middle of the ocean and work for lots different institutions, collecting data –making those connections. So I applied. At the time, I was in a lab on the Isle of Man, sorting out sea sediment samples for an environmental impact assessment. It was great, but I’d just finished studying my Masters and was in this little place, with no windows, on my own, 36 hours a week – scraping and pulling out little sea creatures, working out what I wanted. It was super exciting when I got the email inviting me on the voyage.

Tell us about the first few days on eXXpedition North Pacific, what were your first impressions?

Straightaway, after arriving in Hawaii, the whole crew did a beach clean with Sustainable Coastlines Hawaii. We all gelled so quickly. It’s always a good sign if people are silly and everyone was very silly straight away! I felt nervous, but it was too much to even think about. 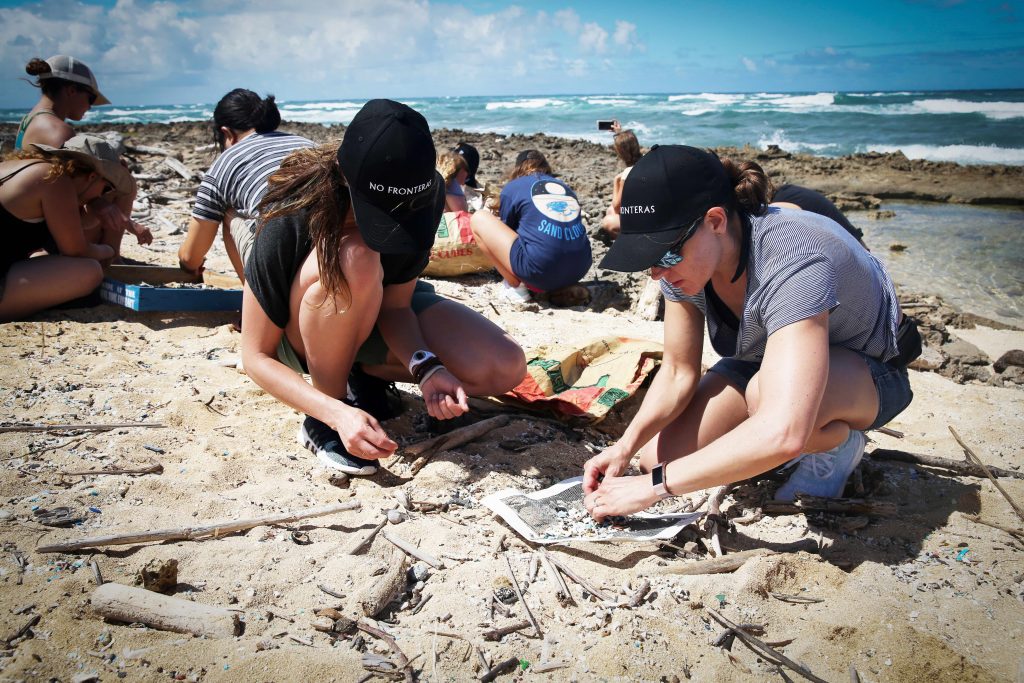 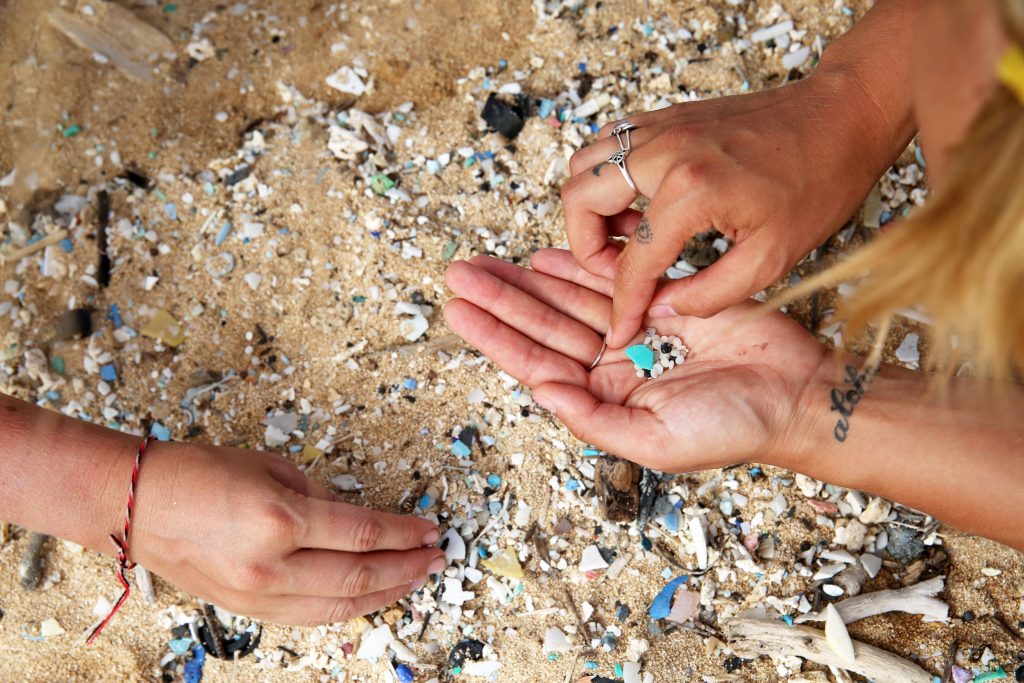 Flying out there, I’d flown from Vancouver to Hawaii. You’re travelling over that stretch of water and thinking, I’m about to spend 3 weeks coming back over that – that’s a lot of ocean I’m going to have to cross’ and the sailing itself was a baptism of fire. I’d spent time working on boats, but not sailing boats, and I hadn’t taken into consideration the angle we’d be working at – when I’d first imagined the trip we weren’t doing everything at a 45 degree angle!

“Sometimes it can feel like nobody’s listening to the scientists on ocean acidification or climate change or sea level rise. Getting the chance to be with a load of people who are passionate about the same issue felt really unique.”

When you arrived at the accumulation zone, did you see anything you hadn’t been prepared for?

The most surprising thing was how long it‘d taken us. We’d travelled such a long distance, sailing day and night, seeing no one else for seven straight days – so to be surrounded by recognisable items from land – it drove home that we’ve truly impacted the most remote regions. There was also this realisation that the situation’s not how everybody imagines it – this thing you can see and scoop up. I realised it’d be harder to take what we’ve seen and experienced back to land to change behaviour – in a photo, it just looks like a blue ocean.

What was it like being with the rest of the crew, from such a mixture of disciplines?

Being a marine scientist you see a lot of the issues. But, sitting around a table with a designer, or a teacher, or filmmaker, you learn that everybody’s got something to add and that that’s how things are going to change. It made me feel hopeful, because sometimes it can feel like nobody’s listening to the scientists on ocean acidification or climate change or sea level rise. Getting the chance to be with a load of people who are passionate about the same issue felt really unique. 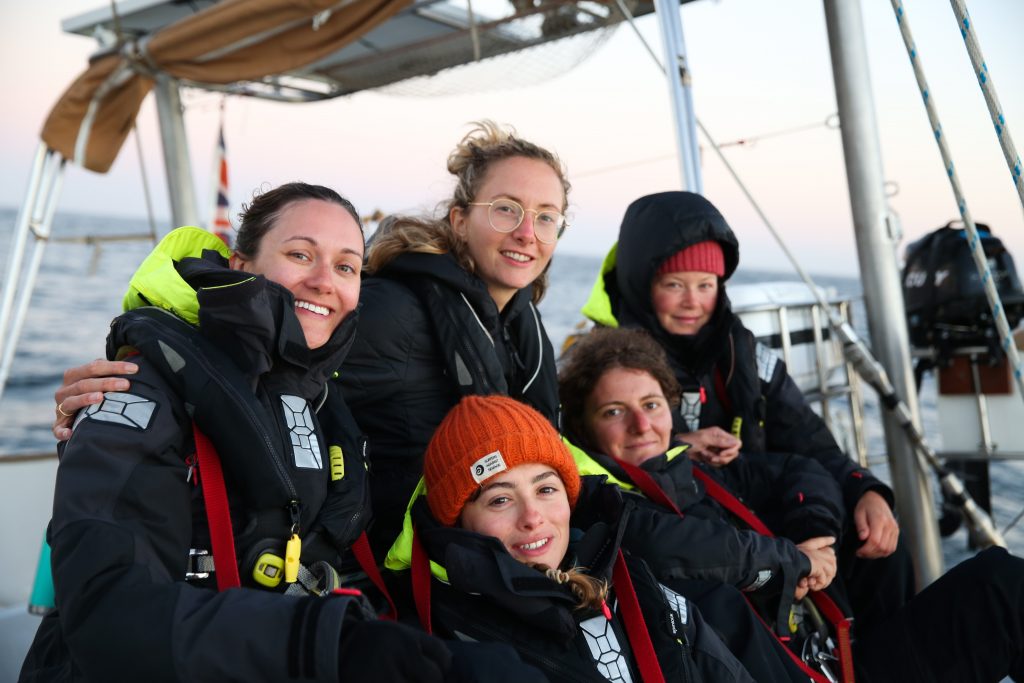 Did the experience change things for you?

It’s hard to remember how I felt beforehand, but it definitely solidified for me that the problems are on land. As a marine scientist, your passions are around the oceans, but a lot of these issues are social issues. The ocean part is the nice bit, but actually I realised it’s all about trying to change people’s behaviour – although perhaps that’s in hindsight, after working in the field. 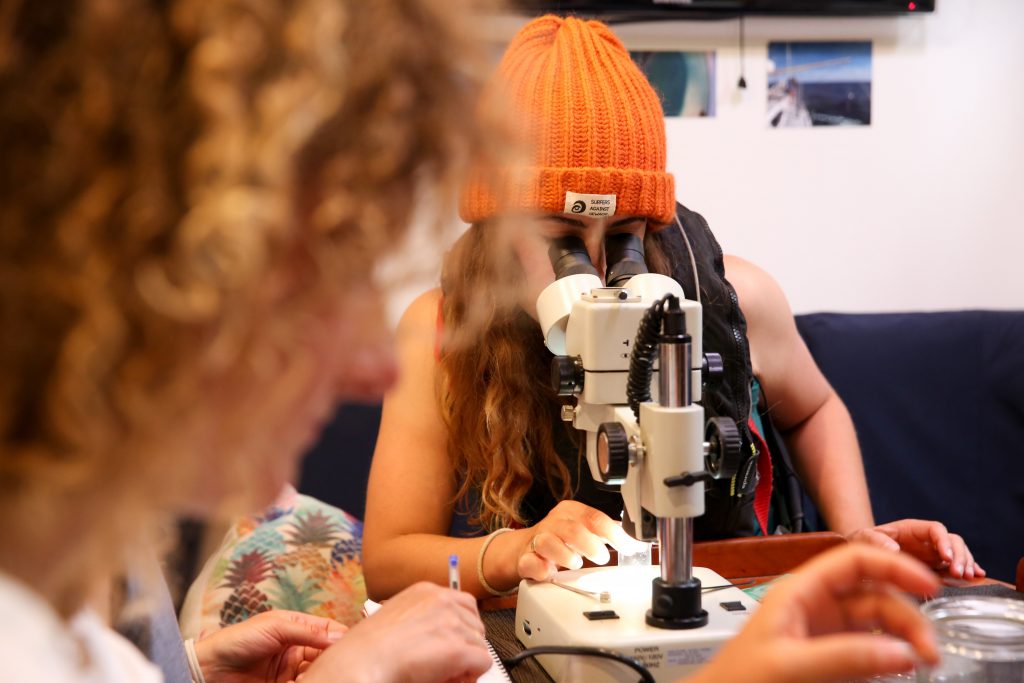 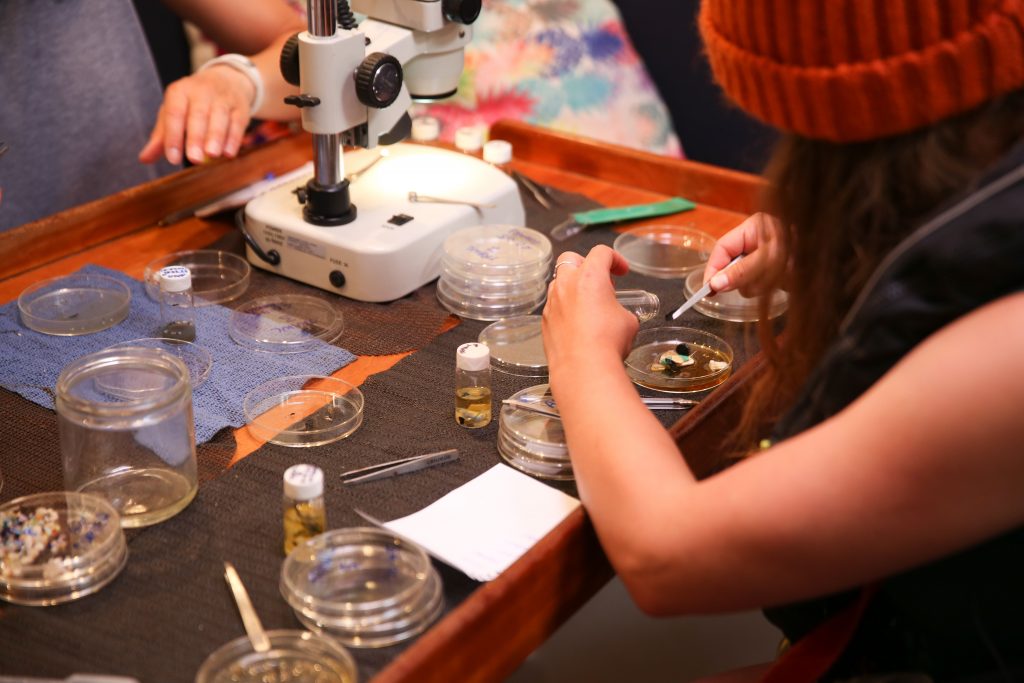 So tell us about the field, and what you’ve been up to…

Thanks to the girls on the boat, I learnt that one of my skills is communicating, which I hadn’t really thought before. And it was the opportunity that arose really – the Isle of Man wanted to do stuff on plastics, and so they got me involved [in the Department for Environment, Food and Agriculture]. I knew that I could really make an impact by helping with an evidence-based approach to writing policy, so I tried to bring as much science into things as I could. I looked at what was washing up on our beaches and tried to write policy through that.

If I was being purely selfish, I’d be off on a boat with my head down. But I know I’ve got skills that mean I should speaking to groups, writing policy, meeting the right people…in science now there’s got to be a balance between doing the research, going on trips and finding things out with community, communicating and actively trying to change things. 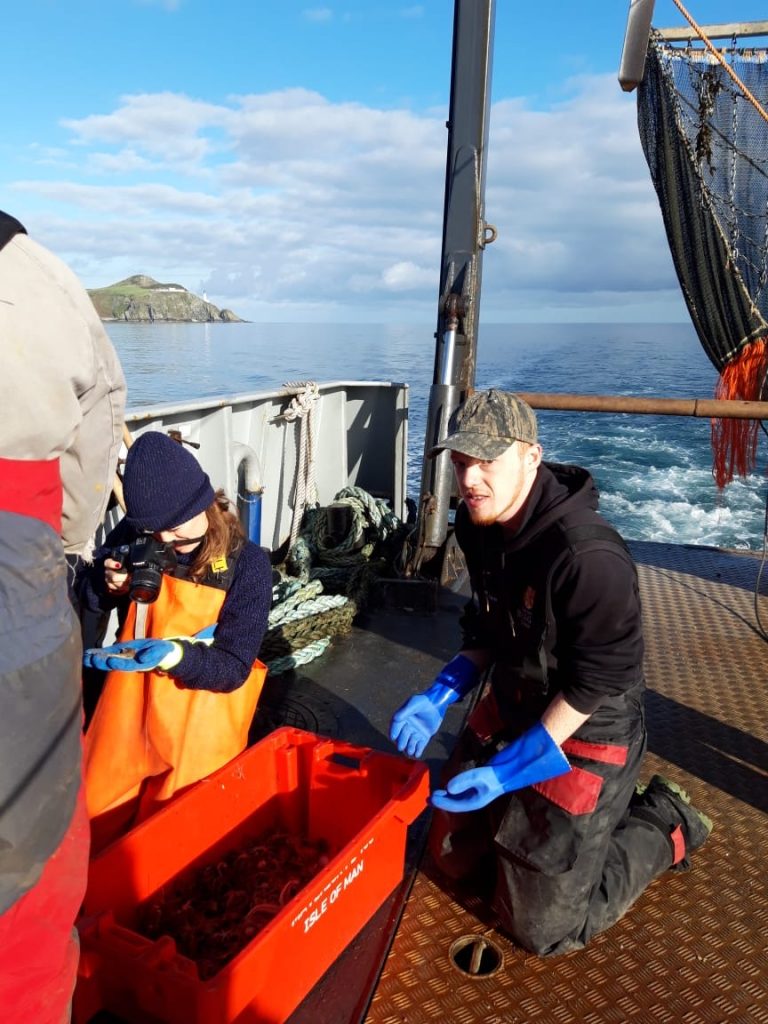 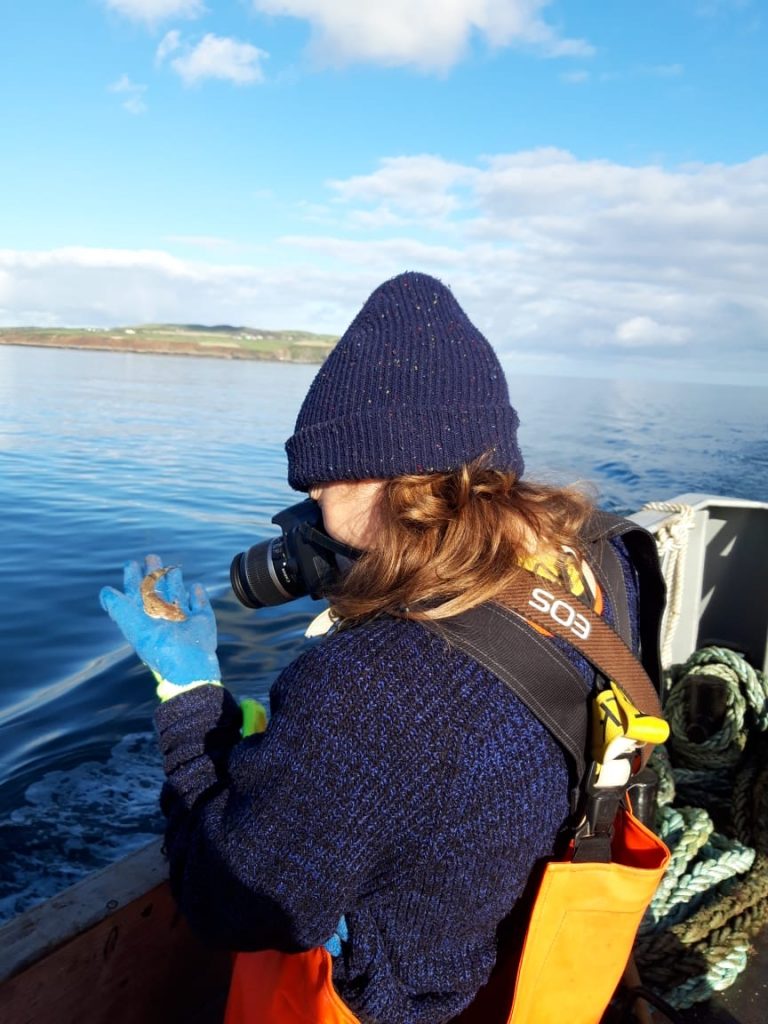 How has your experience informed the work you’ve been doing?

Having seen what’s out there, and what it looks like, helps – definitely. On the Isle of Man we don’t have a huge issue with pollution. We have a fantastic charity called beach buddies, where 10,000 volunteers clean the beaches – so you can’t see it. But, it’s incredibly important to explain how as a global citizen we’ve all got responsibility for what seems so far away. And a good way to get that message across is to talk about my experience in the gyre. There’s a difference between something becoming mainstream as an issue and people actually doing something. I’m conscious I don’t want to be saying the same thing and not changing things. I’m interested in changing behaviours – the psychology of it all

What are you proud of achieving since you stepped off the boat and started your job?

I was keen to get the Isle of Man government to change its own behaviour, before we did anything in the community, so I set up a group of sustainability champions within each department in government, and together we implemented our plastics plan – to remove all single use plastic. It’s really great to have this network to talk about sustainable issues and push things forward. 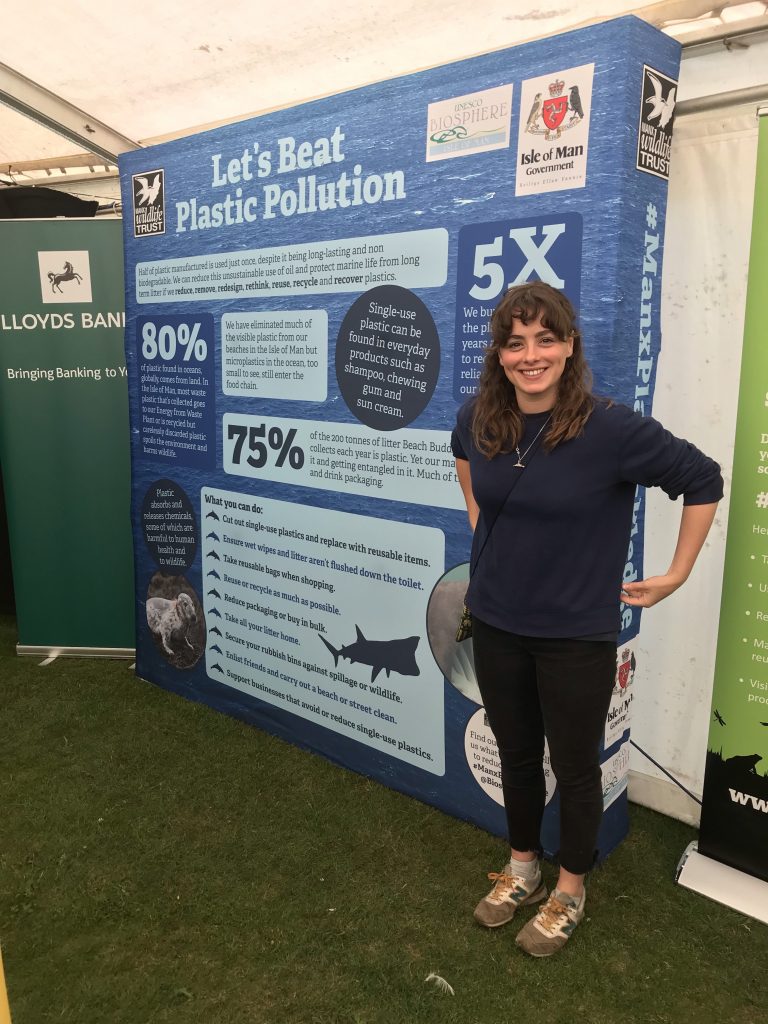 It’s all been a massive learning curve. You can have the best intentions but it’s all about how to get people to get on board. It’s amazing being an ambassador – everybody wants to speak to you – ‘can you talk here?’, ‘come to this school?’, ‘do this policy?’ – which is fantastic, it’s a sign it’s working! And then suddenly a year has gone by, and it’s hardly stopped. That’s my next goal – to remind myself to have a little bit of time to think and reflect.

I’m trying to change the mindset from ‘what difference can one small island make?’ to ‘we can be innovators and world leaders and show everyone how to do it.’

Aside from some reflection, what’s next?

I’ve been moved to start to work on climate change, which is a whole other whirlwind. Working on the Isle of Man, in a small team – I’m just one person doing a huge amount of stuff – it’s very varied, but being on an island, one of the benefits is that you can really influence and change things. An island can be a test-bed for new technologies, frameworks and methodologies. I’m trying to shift us towards being more of an innovator – inviting cool tech companies to come over and trial things, saying ‘we have 80,000 people living their lives on this islands, try your ideas here, and lead the way.’ I’m trying to change the mindset from ‘what difference can one small island make?’ to ‘we can be innovators and world leaders and show everyone how to do it.’ 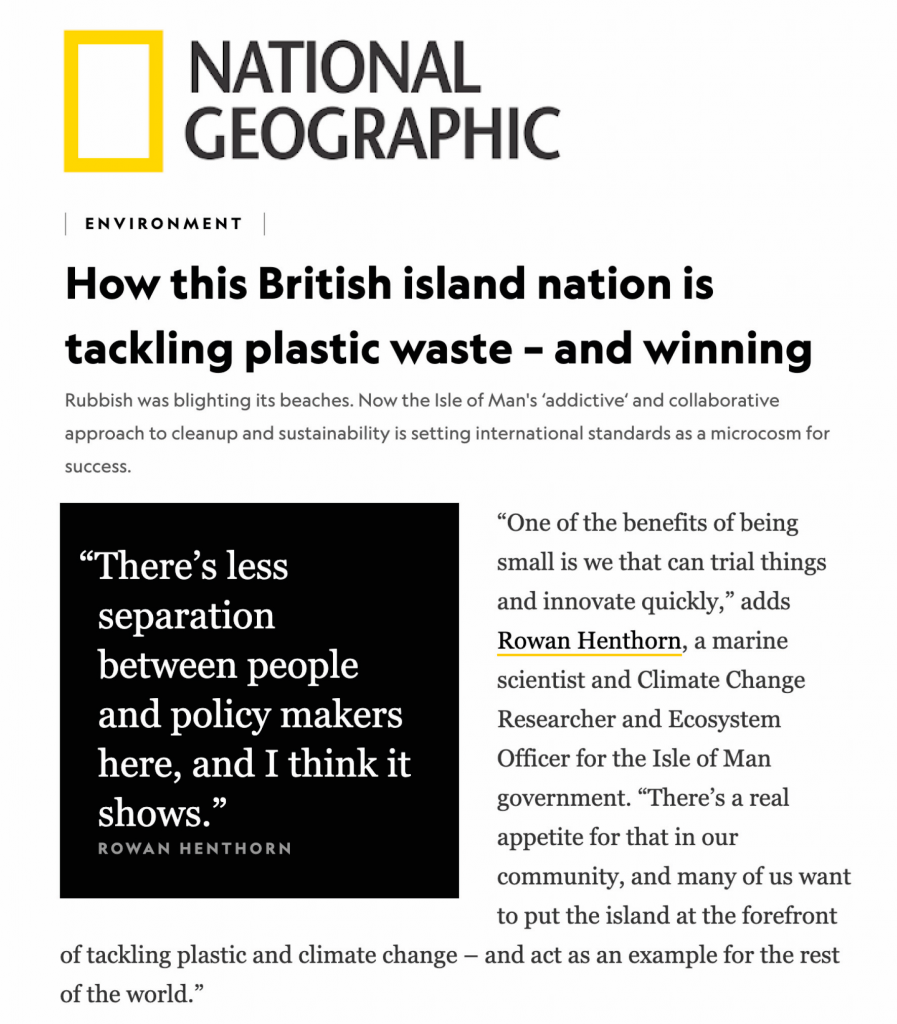 What keeps you hopeful and excited?

The pace it’s all moving at – a lot of the solutions we discussed on the boat are in the process of happening already. I think we’ll turn around in 5 years’ time and thing oh my goodness, we’ve shifted everything, maybe without even realising it, because we’ve been so head-strong and focused.

Would you do it again?

In a second. I cried when I saw land. Everybody was like ‘Oh, are you happy to see land?’ and I was like, ‘No, I want to go back!’ 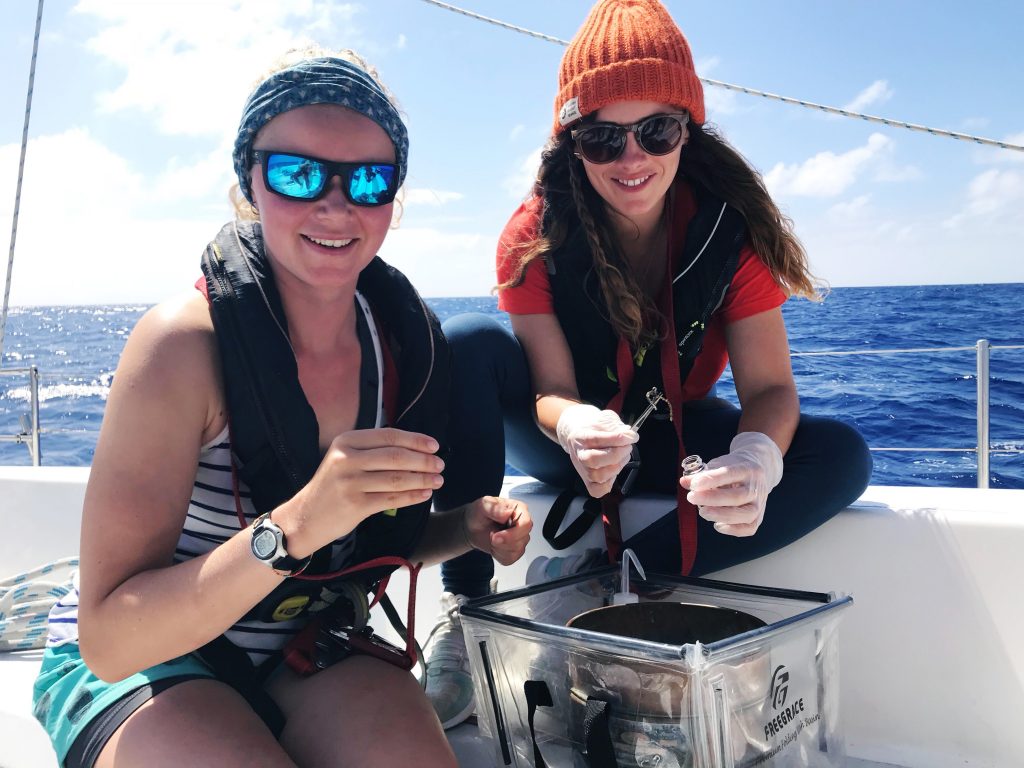 by Crew
Filed under News, North Pacific: One, Superpower Stories

Previous post What’s In Our Clothes and How Does it Affect the Oceans? March 2, 2020
Next post Packing: When Less Is More March 9, 2020
@parley.tv has launched their latest ocean school